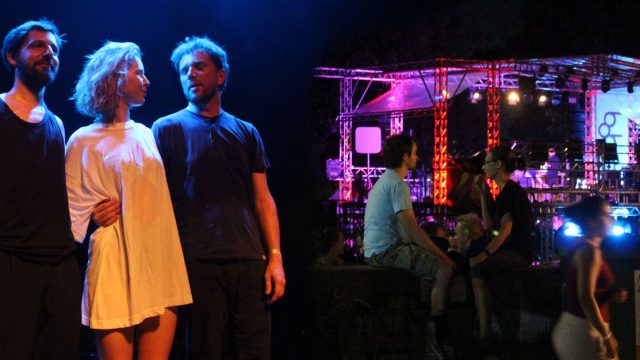 Last Thursday was the start of the 4 day music festival Popfest Wien, which was held at the Karlsplatz in Vienna for the 7th time.
The Festival features Austrian Popmusic (Austropop) and this year 60 acts on seven stages.
It is free to attend and I had a amazing time.

Day 1 opened with Voodoo Jürgens, an Austrian folk singer-songwriter, whom I personally don’t really care for much.

Mavi Phoenix played on the Red Bull Brandwagen for half an hour and she managed to keep the audience engaged and that seems like a feat so kudos to you!

The second act was the MusikarbeiterInnenkapelle, a band consisting of almost 70 members. They played covers of Austrian and international Hits, such as Life is Life (Laibach version), Rock me Amadeus by Falco and Hit Me Baby One More Time by Britney Spears.
For me this was the highlight of day 1, I knew almost all of the special guests which included Ankathie Koi from Fijuka, Skero, Yasmo, Willi Landl and Bobby Slivovsky from 5/8erl in Ehr’n.
The vast diversity of songs kept the show entertaining, the sound was great and I had an all-around great time. Ankathie Koi’s rendition of Life is Life was powerful and sounded great, while Willi Landl somehow managed to pull of Britney Spears and it was amazing…

The final act on the mainstage (as well as the last act I saw that day) was White Miles
They managed to pull of a great show, filling the entire square with only an electric guitar, a drum kit and Medina Rekic’s strong voice. It was fun both from far away and right at the front being accidentally pushed into the mosh pit… thanks for that people. I wasn’t the biggest fan of the music but nevertheless I had a great time, and never got bored during the entire act (although all the songs somehow sounded the same to me)

Sex Jams sadly turned out to be one of the biggest disappointments of the fest, somehow the sound wasn’t great, the show didn’t entertain and my AFS friends and I all decided to have a seat on the other side of the pond behind the main stage.

Little Big Sea and The Crispies played on the Brandwagen on day 2, and I must say I enjoyed their acts more than some of the main acts, Little Big Sea told me they’d be on Spotify in a few days, so go check them out!

Dawa also didn’t leave a good impression, which is a real shame since I actually quite enjoy their music. We were still sitting behind the stage so maybe it was because the sound wasn’t great, however the sound systems normally manage to cover the entire square perfectly. I still highly recommend checking them out online though.

Leyya was AMAZING… this was the real highlight of day 2, it sounded great, it was entertaining and my AFS friends and I had a really really really good time, sadly I didn’t bring my camera on this day so I only took some photos on my friends phone (thank you)
Go check them out, you can find them on Spotify, Soundcloud and everywhere else as well.

For me, day 3 was by far the my favourite, however the only main act I enjoyed was Avec, who are also really nice people, so if you see them live sometime go have a chat if you can.

The Brandwagen had my second favourite act, being Lucia Leena, or Listen to Leena, well, it’s hard to make a list because I liked quite a few acts a lot, but it’s up there.
Instead of talking forever on why I really enjoyed this Band, I filmed their first song, so check it out:

I am skipping a few acts now since I have nothing noteworthy to say, and getting say.

Schmieds Puls. I love Schmieds Puls. Singer Mira Lu Kovacs gave an AMAZING performance in the Brut. The songs were great, the crowed was happy and it was hot… very very hot, almost to the point were I had to go out for a bit because I couldn’t bear the heat anymore. But I stayed, and it was worth it, Mira really knows how to do live events, she was funny and the entire gig was super entertaining. Due to the heat I was sadly unable to take any videos in fear of my camera breaking, so I just took a few fotos:

All in all, I had a real blast at the Popfest 2016, as I had at all the other Popfests so far as well, the food I had was tasty, it’s super easy to get to since it is located right in the center of Vienna, so multiple metros take you right to the event. Also, did I mention it is free… yeah, it’s free.  All the artists I managed to meet and have a chat with were really nice and friendly, and they all signed my program (photo on day 1), well everybody besides the bassist from Listen to Leena, by accident of course so I’m not mad or anything, and he is still a really amazing guy, but still, it was a nice pen, you will be missed.
It was also great to see all of my AFS friends before they depart for their exchange years as well.

If you have the chance to attend the Popfest Wien in the future,
send a postcard.