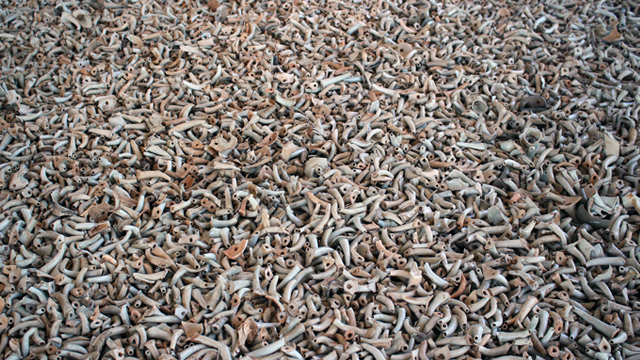 On July 30th I visited the Ai Weiwei exhibition: translocation – transformation, which is located in the 21er Haus as well as the Upper Belvedere in Vienna. Ai Weiwei is a Chinese artist and political activist. The exhibition was curated by Alfred Weidinger.

I had previously seen Ai Weiwei’s work in his 2013 exhibition at the Art Gallery of Ontario; According to What?.

The main piece in the 21er Haus is the Wang Family Ancestral Hall, which was transported from the Beilun District in China to Vienna in the large red containers showed above. It consists of over 1.300 individual pieces dating back to the late Ming-Dynasty, which lasted from 1368 to 1644. It belonged to the Wang family, which was an important tea merchant from the southern province of Jiangxi.
I liked this piece a lot, not only because it uses the location of the 21er Haus to its advantage, by fitting perfectly into the square roofed atrium, but also because it mirrores the history of the 21er Haus. Originally the museum was designed for the Expo 58 in Brussels by Austrian architect Karl Schwanzer, and, like the Ancestral Hall, was later relocated and repurposed.

Spouts… lots and lots of Spouts… This installation consists of an assembly of thousands of broken antique teapot spouts. They look almost like a carpet. the picture above was taken from the second floor, since it would have been impossible to even capture all of them in one photograph, not even all of them fit in this image.
This piece combines two things I have seen Ai Weiwei do in some of his previous works. The first is breaking ancient objects, such as his Han dynasty urn installation. The other is piling up a lot of the same object, as seen in his porcelan He Xie, three-thousand porcelain river crabs.
I like this piece. The slight variations in colour give the installation a very unique texture, which is only enforced by the natural sunlight coming in from the floor to ceiling windows.

This is the last installation in the 21er Haus. It consists of pressed Pu-Erh-Tea, lots and lots of tea. It is visually very simple, but still has a strong impact, also, it smelled amazing. The smell filled the entire floor, which helped enforce the connection between the Ancestral Hall built by tea merchants, and the tea spouts.

F Lotus is the first of two pieces in the back garden of the Belvedere. It consists of 1.005 Lifevests used by syrian refugees. The vests are arranged in the shape of 201 Lotus flowers, which in turn take the shape of a calligraphic F.

This is the last piece I viewed, as I did not have a ticket for the indoors area of the Velvedere, where the piece Lu 鯥 is located. It consists of 12 oversized Zodiac Heads. As many of Ai Weiwei’s installations, this one has a very political meaning, which is best described by the artist himself: www.youtube.com/watch?v=u1f_HmoT7bM

To conclude, I thought Ai Weiwei’s translocation – transformation is a beautiful exhibition. The pieces worked well with the spaces, even the non-location specific pieces. The Zodiac Heads as well as F Lotus are admission free, to see the pieces in the 21er Haus, a ticket for an adult would set you back 7 Euros, and to see both the pieces in the 21er Haus and Lu 鯥 which is located inside the Belvedere, the costs would add up to 18 Euros, this ticket price also includes all of the other exhibitions currently on display at the Belvedere.

Go have a look at Ai Weiwei’s work if you ever have a chance,
maybe even send a postcard,