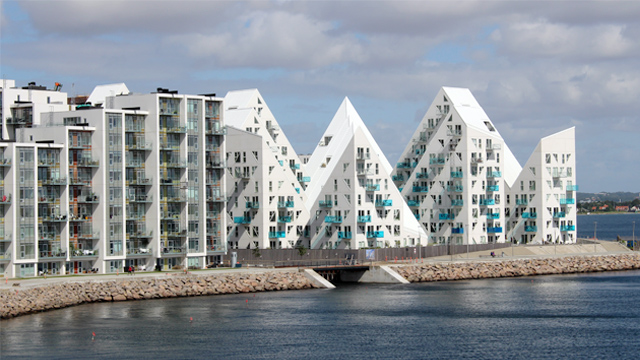 The City of Aarhus

On August 9th I went on a day trip to the city of Aarhus, which is located on the Jutland peninsula. It is the second largest city in Denmark. The city is known as The City of Smiles as well as The City of Cafés. The latter soon becomes self-explanatory when you spend just a few minutes walking through the city, you will find tons of cafes scattered throughout the city, we decided to eat at a Mexican finger food shop, called VACA (very Danish isn’t it?).

The AroS museum was established in 1859. It is the oldest public art museum in Denmark outside of Copenhagen. Danish-Icelandic artist, Olafur Eliasson designed the Your rainbow panorama on top of the museum. The permanent installation opened in 2011 and features a 150-metre-long circular walkway. The different colours of the spectrum create a really interesting light. Below I added a few photos to show how the light changes, the photographs are unedited.

The exhibitions I was able to see during my stay at the AroS were: Robert Mapplethorpe – On the Edge as well as ARoS Focus/New Nordic: Meriç Algün Ringborg.

#2 Robert Mapplethorpe – On the Edge

Robert Mapplethorpe was an American photographer born in 1946. The exhibition On the Edge features self-portraits, as well as portraits of celebrities from the scene of New York in the 1970s and 80s, such as Andy Warhol, Arnold Schwarzenegger, Louise Bourgeois and Patti Smith. Also featured in the exhibition are photographs of voluptuous men and women, such as of body builder Lisa Lyon and nude black men, whose bodies almost look like antique sculptures. One can also find photographs of flowers and the curatorial team added antique sculptures.

Next to the previously mentioned Your Rainbow Panorama, one of the most famous architectural sites in Aarhus are the Isbjerget (shown above), the Aarhus City Hall.

Isbjerget: The Isbjerget (Iceberg) is a residential building in the Docklands area. It was completed in 2013. It was designed by the four architectural firms CEBRA. JDS Architects, Louis Paillard and SeARCH. It was built on the former industrial port area. In 2013 it was awarded the Best Residential Development award at the French architects conference MIPIM.

Aarhus City Hall: The city hall boasts a modern design. It was designed by architects Arne Jacobsen and Erik Møller and completed in 1941. It uses Norwegian marble and copper, signified by the characteristic green verdigris. It was included in the Danish Culture Canon in 2006.

Aarhus is great for shopping, if you went to the AroS, you can easily go to the ARoS Shop, they have tons of books, as well as design actually made in Denmark. Magasin du Nord is a HUGE shopping center located at the heart of Aarhus. Magasin gives you a 10% discount if you are a tourist and are able to provide an ID to prove it, such as a drivers license or a passport. There are also lots of brands that have stores in Aarhus such as Weekday, which is Swedish, so almost local (owned by H&M since 2008 though, still Swedish, less “local”). You can also find small clothing stores and boutiques throughout the city.

Aarhus has its own Airport, and is easily accessible by car, train and ferry. I visited Aarhus by ferry so I cannot speak for the other options, but to give a quick overview; There are 3 different ferries leading to Aarhus, the Fjord Line, Stena Line, Mols Linien  (which is the Ferry I went with) and the Color Line.

To conclude, I had a great time in Aarhus and I would highly recommend visiting it if you ever get the chance. I had a blast visiting all of the great architectural sites and museums, as well as eating great food and going shopping.

If you ever get the chance to visit,
send a postcard,