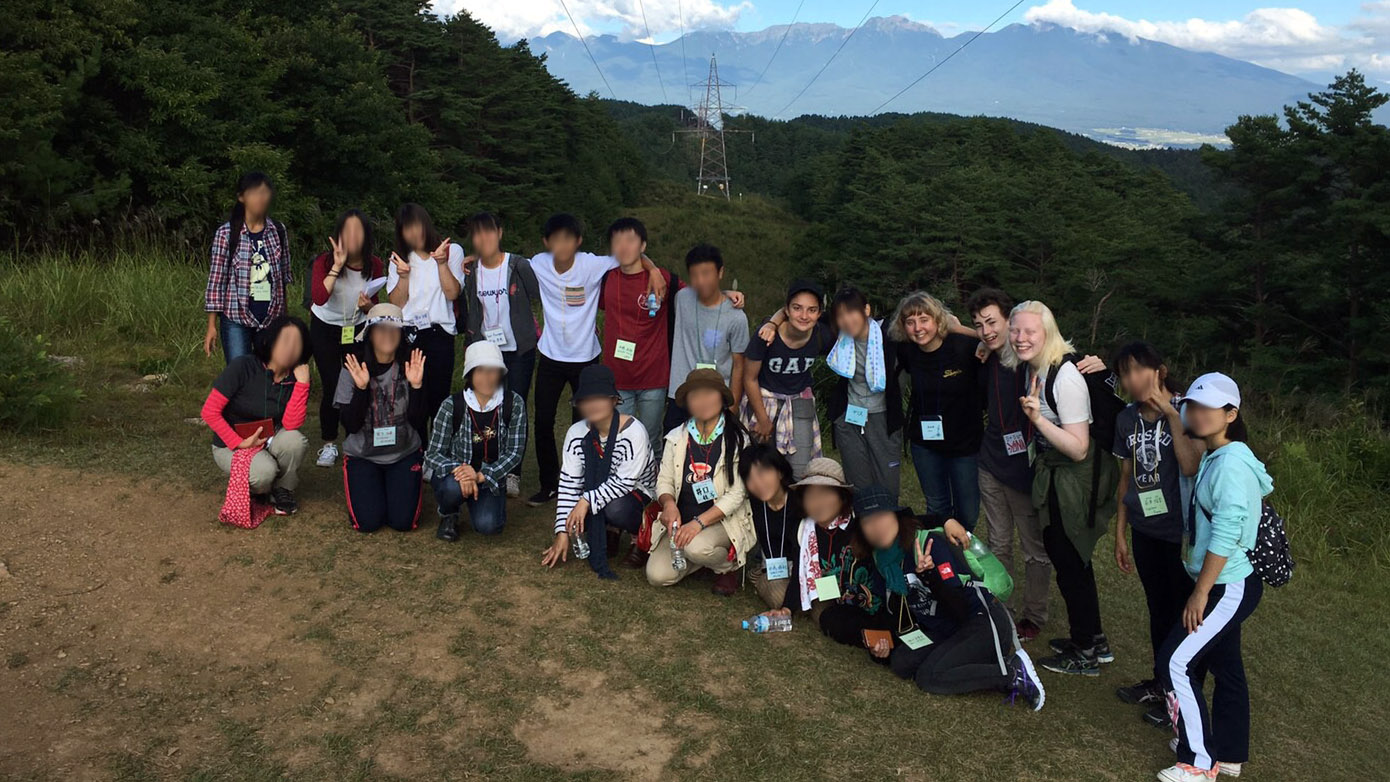 Ok ok ok ok… I know this camp was quite a while ago, but I have had almost no time to sort through the images and write (mainly because of a very hectic school life). Let’s begin shall we:

When I arrived in Shiojiri, my LP (Liaison Person) told me about Takato Camp, one of the camps AFS Nagano organizes, which was held on September 3rnd and 4th. I got an information sheet in both English and in Japanese, so both my Host family (who weren’t going to the camp) and myself could understand everything. This is something I’ve learned while being in Japan so far, they love their print-outs and information sheets, I never thought there would be a necessity for a homeroom class everyday, but we get so many papers it is unbelievable [I am rather tired today so I might ramble a lot, as I am packing for my Saitama trip with Club and it is quite late].

The paper describes the camp as follows:
“Let’s have fun and make friends. We are planning some activities that will help to get to know each other well. Beautiful mountains and fresh air, wild flowers and trees of Takato will fascinate you. Please remember to prepare for your presentation time (Show & Tell) :)”

Wait what? Presentation time? Who said anything about presentation time?
“Any kind of speech is appreciated, about your country, your natural family, things you like, your impression about Japan, and so on.” – Ok, that’s doable – “please use a powerpoint or printed photos, maps etc.” dammit, now I can’t just improvise. I actually have to prepare… that’s ok, I’m only leaving at 11am, I have time in the morning to make a good powerpoint…

AFS is super well organized, almost to a ridiculous degree, it’s amazing. Nagano-Nanshin [my AFS Chapter] prepared for a volunteer to pick me up, we had a fixed rout and schedule, it was unbelievable [my description doesn’t sound that special cause I am summarizing, every detail was planned]. It’s about an hour drive from where I live to Takato, and we picked up another AFSer from Finland on the way. She’s already been in Japan for 5 1/2 months and her Japanese is just incredible! I really hope my Japanese will be that good by the end of my stay. Most of the people had already eaten when we arrived, as we still had to buy lunch and I wasn’t feeling so great so everything was pushed back a bit, so we got to eat during the introductions. We had gotten curry and fish, and had only recieved one pair of chopsticks and one spork. I let her have the chopsticks for the curry, leaving me trying to eat fish and rice with a spork [not the easiest of things]. It all looked very amusing I am sure, but luckily there are no photos of it in existance [I hope]

After food and a quick round of introductions [the two happening simultaneously], we went hiking in smaller groups. Note to future self: buy some comfortable shoes that you can actually walk in for long periods of time a.k.a my school commute everyday, cause mine aren’t and I had some pretty big blisters by the end of our hike. Well, hike is probably exaggerated, as we only walked for around 2 hours and it was only around 4km [around 2.5 miles]. There was a quiz with quite a few questions while we were walking, to keep things from getting boring, which included things like: try these 4 sweat breads, what are the fillings? [red bean paste is and will always be the best. period.] We also stopped many times to take group pictures [like the one above, which is cropped terrible I am sorry.] and have chats [a lot of laughing].

Oh my, were there a lot of presentations. Also, a surprising number of them were about Austria, as two Japanese Students had been to Austria with AFS, one of them being in my class at school and also in the same club. Because of this, I decided not to talk about Austria from a touristy point of view, but more as a quiz show, as that’s all I had been seeing on tv so far. I had brought a ton of Wiener Zuckerl, my favourite Austri… my second favourite Austrian candy, and gave it to everybody who got a question right, or to everybody in general, candy is the best way to make friends. My talk was about things from Austria, highlights including: PEZ is actually Austrian, and so is Red Bull. Wiener Coffee is only called wiener coffee in Japan, and nowhere else, and, as they are super popular in Japan, blood types were first discovered in Austria in 1901 by Karl Landsteiner.
Above are some of my powerpoint slides, which I made in the morning of the first day of camp, so as you can tell they started out ok, and ended… well, the way they did [I’m not showing you the last few because they are terrible].

According to our schedule, we had free time from 9:30 to 10pm, 10pm being our bedtime. Officially, that is 100% what happened, unofficially we stayed up until around 4-5am playing card games and eating snacks and chatting [there was still some leftover candy from the hiking bag]. This was the most fun I had in a long time, and the morning thereafter was one of the worst, since we had to get up at 6am [i.e 1 hour of sleep]. There is something oddly satisfying about playing a variation of Bullshit [cheat in Great Britian] at 2am. The image above shows [two thirds of all AFSers in Nagano (including myself)].

After the camp concluded on the next day [what felt like the same day], everybody said goodbye, lots of hugging took place [who said Japanese people don’t hug?], and the car ride home commenced. We stopped at a Konbini and bought some lunch, well, we stopped at 2 Konbinis but were so terribly undecided so we went to the next. Here I was first introduced to Papico, which you can read me obsess over in my last post. It was super windy while we were eating so I tried not to spill my soba noodles everywhere, but it was tricky. Have I mentioned that I really really really like soba? It seems like I like all Japanese food though, so moving on…

We stopped at the Suwa Taishi Shrine on the drive home. This was my first real visit to a big shrine, so it was very exciting. I got an O-mikuji, which is a random fortune written on strips of paper. They range from Great Blessing all the way to Great Curse. Our party purchased 3 fortunes, myself getting a small blessing or small luck and the other two both getting great blessing. I also started Goshuinchou, which is a type of souvenir book where shrines can put in their stamp plus a calligraphy in a special book, they aren’t that expensive and look super pretty, read the link above for more information.

In my head I said this will be a shorter post, the funny thing being that the word shorter just now was the 1200 word, making it anything but short. I do hope you enjoyed though, and I will try to write more regularly. Yesterday [September 15th 2016, for all of you weird future people] was our schools class match, a rather large sports event, which I will write about soon, as well as the Saitama trip with club which will be this weekend. I hope you look forward to those posts, and as always if you have any questions, don’t hesitate to leave a comment, I’d love to be able to help if I can.

If you have anything else you want to say, why don’t you
send a postcard,