Hanafuda [花札], which literally translates to ‘Flower’ and ‘Cards’ is a Japanese playing card game consisting of 48 beautiful flower cards. If you’ve seen my blog header, you might recognize the card with a crane looking at the sun – that’s from this game.

The cards have a long and fascinating history, and there are many different games you can play with them! Plus, the cards themselves are really beautiful. I love that instead of just having numbers and suits the 48 cards have 12 different flowers and various different animals on them.

Here’s a complete guide to Hanafuda, the history, the design, and of course how to play.

A set of Hanafuda consists of 48 cards. Unlike most card games that have 4 suits with twelve cards each, Hanafuda has 12 suits with 4 cards each.

The motifs are seasonal, and each suit contains the flowers of a that month. January, for example, has pine trees, February has plum blossoms and so on. All of the flowers are typical for Japan and are really pretty.

The special cards are red ribbons, red poetry ribbons, purple ribbons, animals and lights. The poetry ribbons’ meanings are not clear. Miyoshino [みよしの] might refer to a beautiful cherry blossom spot in Nara, while the meaning Akayoroshi [あかよろし] is unknown.

The animals include a deer, geese, a boar, a cuckoo, a bush-warbler, butterflies and a bridge, which refers to fish I believe.

The special lights are the crane and sun, camp curtains, the full moon in red sky, the Rainman with frog and the Chinese Phoenix.

The history of Hanafuda

Hanafuda’s history starts in 1549 when Portuguese missionary Saint Francisco Xavier brought gambling cards to Japan. He brought the Spanish card game Hombre with him, which is one of the Europe’s oldest card games. When however, during the Edo period [1603-1868], Japan closed its ports again, the card game was forbidden.

Because of this, new types of card games had to be created, which was the birthplace of Karuta [かるた]. The word Karuta comes from the Portuguese word for cards: Carta. There are countless different types of Karuta cards, but when one hears the word, Uta-garuta usually come to mind, which are the cards with the 100 waka poems from the Hyakunin Isshu [百人一首] collection.

The cards that were created because of the ban had nothing ‘foreign’ about them. They were full of Japanese imagery and poems. Although these Karuta were also banned, they were still used throughout Japan. There were a bunch of predecessors that were used exclusively for gambling, but Hanafuda cards were used by most. Due to all these strict government regulations however, card games lost popularity in Japan.

That all changed in 1889 when a little company called Nintendo was founded to produce Hanafuda cards. Spreading slowly throughout the country, Hanafuda are now commonplace in most households in Japan.

Nintendo still produces the cards to this day, and they are beautiful.

I’d like to start out by saying that there are an uncountable amount of rules and variations, and most regions in Japan play by their own local rules. Even within a certain area there are different house rules. Here’s how I learned how to play koi-koi. 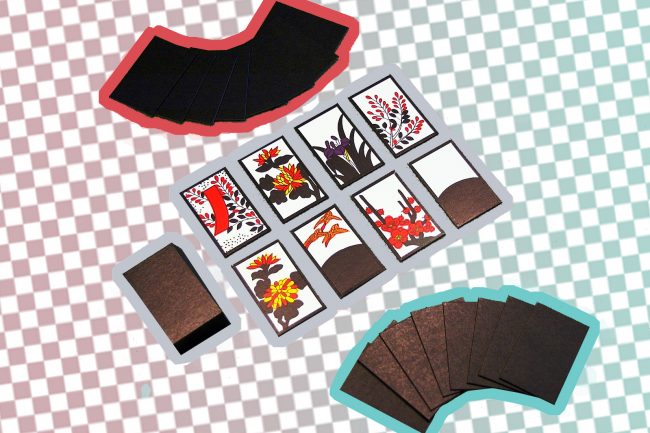 The goal of the game is to accumulate as many points through card combinations as you can in 12 rounds.

Next, the dealer starts to hand out cards counterclockwise.

The round has to be started again if all 4 cards from a suit are displayed openly on the table when dealing or when a person has a complete in his suit at the beginning. If only 2 people are playing, the round is automatically won by a player if they have all 4 cards of a month in their hand [6 points] or they have 4 month pairs. [also 6 points]. If this occurs the dealer has to shuffle again and the next round starts.

Now the next person has to play a card. Again, if it matches, they get to put the match to the side. If it doesn’t, they have to leave it on the table. They also pull a card from the pile and hope for a match. This continues until one of the players gets a combination with their ‘captured’ cards.

It is important to note that if you call koi-koi and somebody else gets points after you and ends the round, you end up empty handed and the other player gets their points doubled.

The following combinations give you points:

Important: For every additional card you get an extra point, so if you have 10 dirts, you get 1 point, for 11 dirts you get 2 points. The same thing goes for the Animals and Ribbons. If you have the Ino-Shika-Cho combination and get an additional animal, you get 6 points.

The official game lasts 12 rounds, and the player or team with the most points at the end wins. 12 rounds is a bit much though, and I usually go for 6, but you can play as many as you’d like.

Since there are so many different rules, I can’ really tell you which version is the ‘real’ one. A variation I like is to play blindly, as in, put all of your cards face down in front of you and always drawing one at random. Another house-rule is that if you score over 7 points in a round, those points are doubled. For example, if you have 4 points and said koi-koi once, you’d get 8 points normally. Since 8 is more than 7, you’d end up with 16 points for that round. 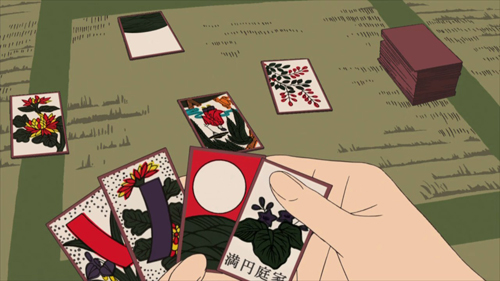 A koi-koi scene from Summer Wars // ©

The 2009 anime movie Summer Wars, directed by Mamoru Hosoda heavily features Hanafuda. Our protagonist, Natsuki Shinohara, plays the game with her uncle and against, well… spoilers. The movie itself is a must-watch. Director Hosoda, who is known for modern classics like The Girl who Leapt Through Time, Wolf Children and The Boy and the Beast, creates a beautiful blend of science-fiction and comedy in Summer Wars.

The basic rules of koi-koi are also explained in the film, so go give it a watch.

And that’s all I have for you today! I hope you enjoyed it. This post took a lot longer than my usual ones as I decided to illustrate all of the cards; I hope it helped visualize the stuffs.

Continue reading: Today I’ll recommend continuing with my post on Hanami, as the march light features it. Alternatively, here’s my most recent post about cool Japanese words I wish other languages had!