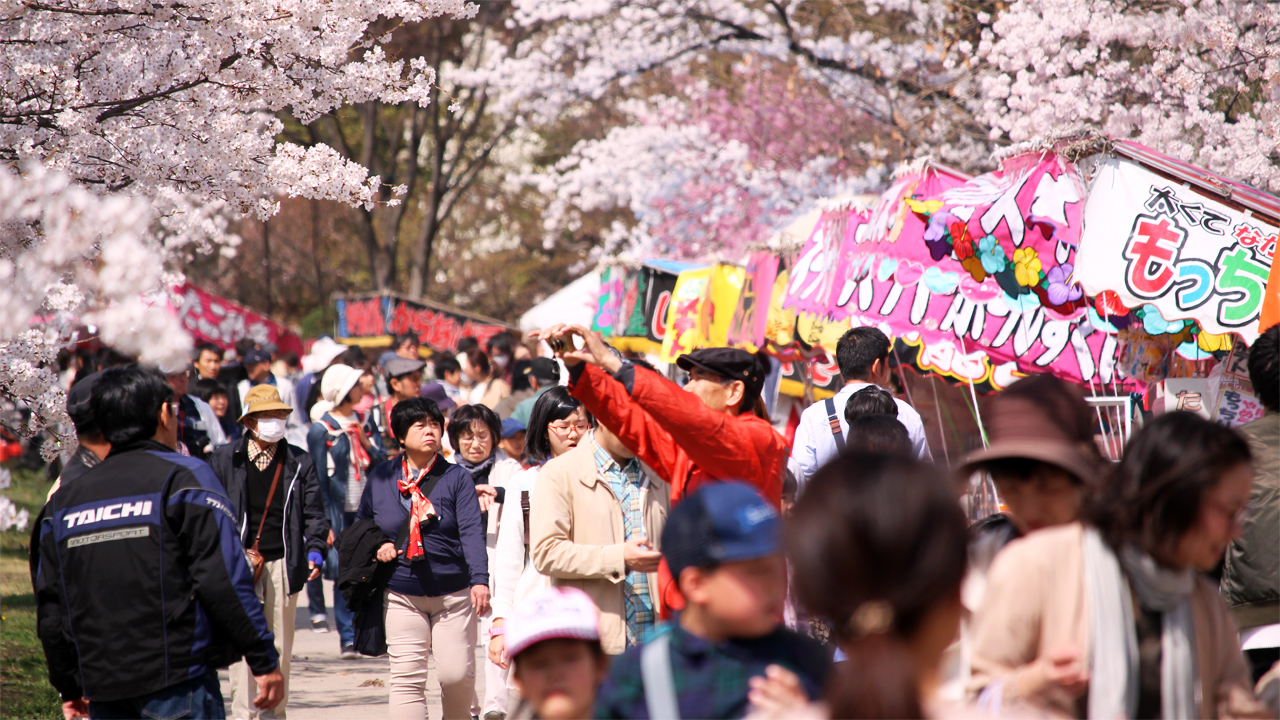 Author:Yona Schuh
Category:everyday life, postcards from japan, sightseeing
Tags: Festival, Sightseeing
← City Branding in Japan
A Day Like Any Other →

Hanami [花見, lit. Flower Viewing] is one of the most beautiful Japanese traditions. The event, which is commonly also translated to Cherry Blossom Festival takes place at countless locations in Japan, and you can easily hold your own.

So, get your picnic blankets ready, prepare a beautiful 弁当 [Bento, Jap. Lunch box] and find your nearest cherry tree, because it is time to hanami.

Hanami is a very old tradition, and is said to be at least a millennium old, with most historians placing its origins somewhere in the 8th century. The tradition started with plum trees, although it did not take long for cherry blossoms, sakura in Japanese, to take over.
Nowadays, when somebody mentions hanami, they are almost exclusively talking about cherry blossoms.

Every year, the Cherry Blossom Front [桜前線] puts out a forecast to when the cherry blossoms will be in full bloom every year. Most Japanese people I have met have told me that they check the forecast every year to plan events around it.

Most public parks and castles hold Hanami Festivals, with large picnic tables and stalls selling food lined up. I got to visit quite a few of these actually, most notably Ueda Castle and the Takato Castle Ruins Park, the latter being widely considered as one of the top three locations in Japan to see cherry blossoms.

Our school also went on a Hanami to the local park during long homeroom, and we all ate our bentos together underneath the cherry trees. Since the cherry blossom season is coming to an end, we could see the blossoms falling like snow, which was really beautiful.

The image above shows various photographs taken at Ueda Castle, while the video below is from Takato. Take note of the distinct pink colour of Takato’s cherry blossoms.

An important thing to remember is that one doesn’t need to visit a famous hanami location to have a cherry blossom viewing party. One doesn’t even have to be in Japan, as my friend Luna from Slovenian site TabemonoWeb demonstrated with the images below, and yes, next time I met up with her she will have to teach me how to make some of this. I could always teach myself of course, as her website has really comprehensive recipes that you can follow.

A friend’s Hanami in Slovenia.

What you will need;

A Picnic blanket [this should probably be a given, in Japan you can buy ones at the 100¥ store during hanami season.]

Of course you should always check if picnics are allowed before going, and making sure you get there early enough to have a nice spot.

My own hanami | Sakura related items

During Cherry Blossom season you can find all kinds of cherry blossom related items, including a bunch of different types of food. From Sakura Mochi to Sakura Jelly and even things like Sakura salt. In the photograph above you can see my collection of Sakura stationary, most of which came from a 100¥ shop.

And that’s all there really is to say about Japanese Hanami. I am sorry if the structure of this one feels a bit off, I might come back and edit this some more when I have the time, I felt a bit guilty for not having posted in a while so I rushed this one out a bit.

The next few posts I have planned will be a bit more substantial, and as Golden Week is upon us, I will hopefully have a bit more time.

I am going on a 10 day short term exchange to Saitama starting next Saturday and will have a lot of new things to talk about thereafter, although I will not be able to write much while away.

[p.s. a postcard actually arrived today from a friend in Great Britain, and it’s going right up on my wall. I love stationary…]