I was on Japanese TV

So… I was on Japanese TV… twice.
During my exchange year to a Japanese high school, I joined the English debate team. There, we won quite a few tournaments, leading us all the way to the small international PDA Debate World Congress in Osaka after placing first at the PDA parliamentary debate national championship. It was a fun, but stressful time. Because of this, we were interviewed for various newspapers and appeared on the NHK evening news.
This is that story.

I’ve been posting a lot of videos over on my Youtube Channel lately, so if you want more frequent updates, that’s the place to find them. It would mean a lot to me if you were to subscribe as well.

I am not quite sure how it all started, but I was involved in the process beginning with a journalist at NHK coming to our school to ask us about debating and learning English and all that good stuff. It wasn’t the first time somebody had come to our club room to ask us a few questions so although my Japanese was rather poor at the time, I didn’t feel completely lost.

A few days later, we got a script sent to us with what the questions would look like and how our answers should be, based on our chat with the reporter. Most of mine were simply left blank – probably because I couldn’t really articulate my ideas properly in Japanese during our interview. We also got a filming date a few weeks on with a time and place, the place being the NHK Studio in Nagano City. 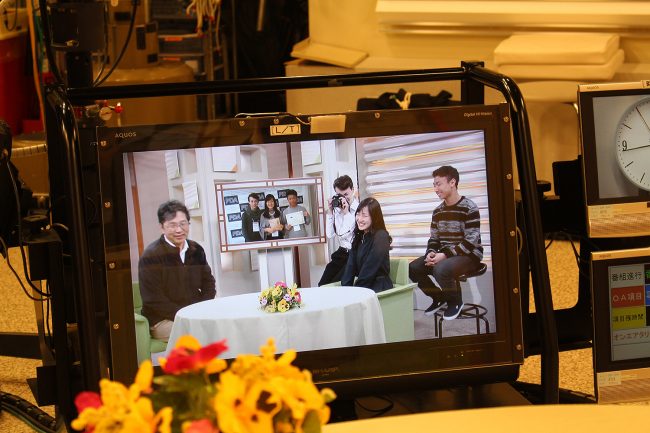 When we arrived at the studio early in the morning, we were greeted by a different group of TV news people hastily preparing everything. Japanese TV, and I guess most other TV stations across the world, is a tight scheduled business. Although we arrived in the morning, our interview was only scheduled to be filmed in the early afternoon. Before that we had a script run through, got a diagram of the studio and where we should sit and look. We also got lav microphones and Momoko got her hair done as well. It was a lot of fun.

When we actually go to filming the segment, everything went super quickly. We entered the studio and were seated immediately. There was a big countdown next to the camera with 8 minutes, which was our allotted time. When we first ran through the entire interview, it took exactly 7 minutes and 58 seconds. Afterwards, we filmed the entire thing again two times to make sure we got everything the right way from every angle. The interviewer laughed at the exact same times every time. It was almost like clockwork.

One of our Newspaper interviews in Japan

And then we went home. Three days later, the segment appeared on Japanese TV.  It was so weird seeing oneself on the screen, speaking broken Japanese

If you want to learn more about Japanese high school clubs in general, here is an older blog post all about them. And yes, I used the same cover image, I recycle.

And that’s all I have time for today, I do hope you enjoyed this post. It was a lot of fun.