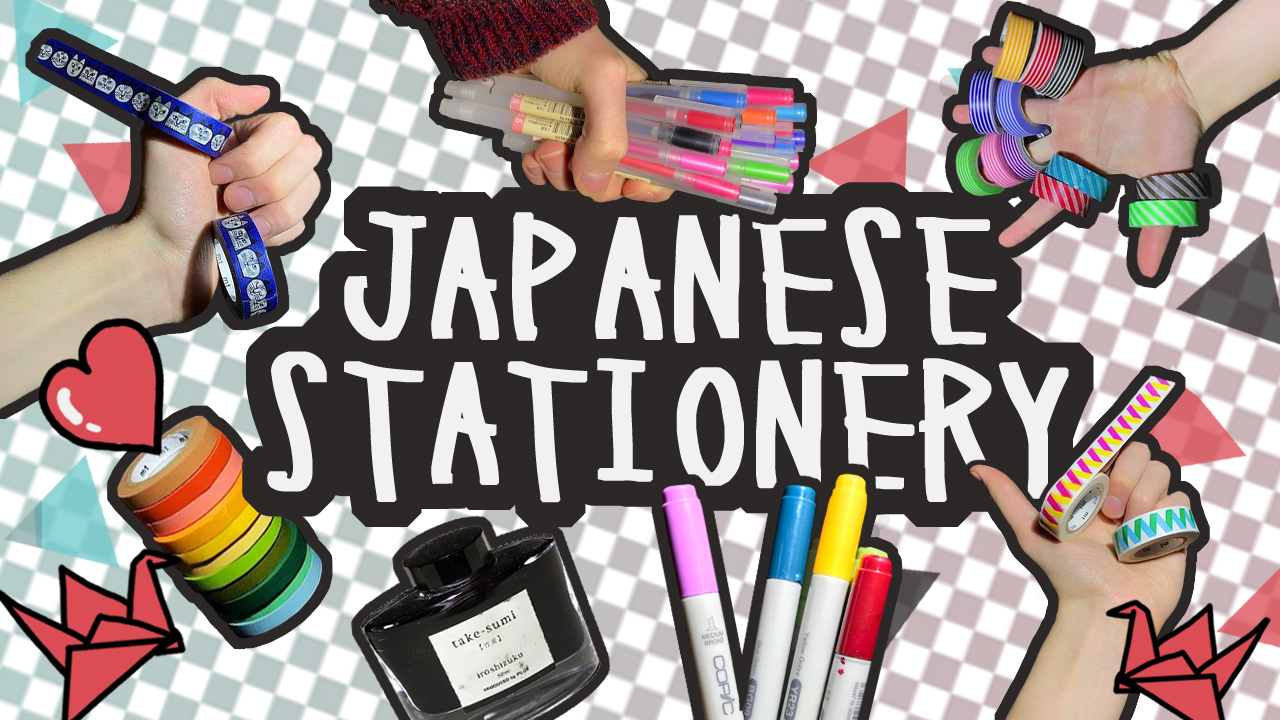 When thinking of stationery, from pencils and pens all the way to paper and stickers, Japanese stationery brands usually dominate their respective field. In my pencil case alone, I have a Tombow eraser, Mitsubishi pencils, a whole bunch of Muji gel-pens, an order of magnitude more MT masking tape than anybody could ever use, Zebra mildliners, a Pentel brush pen, and both a Pilot and a Platinum fountain pen. Many of these I didn’t even buy in Japan, and are readily available in stores around the world.

So what makes Japanese stationery so special?

Japanese consumers can easily tell a “good” pencil from a “bad” one, and many are willing to spend the extra yen to get a nice set. One can get a whole bunch of pencils for 100¥, or, if one is willing to spend a bit more on a set of pencils, one could get Tombow‘s Mono pencils or Mitsubishi Pencils‘ Hi-Uni, a box set of the latter is sitting on my desk right now and I love them dearly. Next to these high quality pencils there are also a bunch of cute designs available, showing characters such as Pikachu,  Disney characters, Gudetame, and many more. A friend of mine got me a Sumikko Gurashi mechanical pencil and it is the cutest thing in the world. 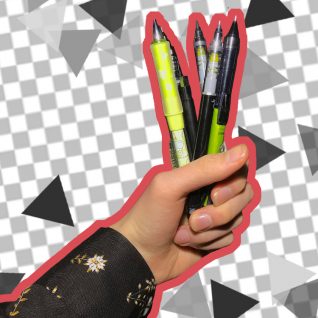 Since writing Japanese characters can be rather difficult using very soft pencils, as they require too many fine lines, the mechanical pencil was reinvented in 1915 by a Japanese metalworker. The Ever-Ready Sharp Pencil, as it was called at the time, turned into what Japanese people call the Sharp Pen, the mechanical pencil. Innovation didn’t stop there though, as several Japanese brands have been competing against each other with new ideas and technology to create the ultimate mechanical pencil.

These can range from rather simple concepts, such as having the button to advance the lead on the side, saving time as one does not have to readjust one’s grip. Tombow’s Mono Graph One. I have one in Lime and I use it all the time.

For artists and other people who require total control, the Pental Graph 1000 series has a very long lead sleeve, enabling one to always so the tip. It is also very well balanced and quite comfortable. I have the 0.3 Graph 1000 For Pro and I would highly recommend it.

Another innovation that one can find in Japan are the shaker pencils, mechanical pencils that don’t require the push of a button; a simple shake suffices. These are quite common, and, during tests at Japanese schools, one is able to hear the occasional sound of a shaker pencil. I have one from Pilot, but Tombow has quite a nice collection. The Pental Orenz go one step further, automatically advancing the lead while writing.

The two most well known and high-tech mechanical pencils are the Zebra Delguard and the Mitsubishi Kuru Toga.

Zebra’s Delguard pencils are mechanical pencils where the lead is virtually unbreakable. I have one in 0.3 and I have spent the last few minutes trying to get the lead to break, and I only managed to succeed after advancing the lead four times, which one would normally never do. The patented Delguard system causes the lead sleeve to extend when too much pressure is applied, causing the led to be fully protected. This is the first mechanical pencil I purchased whilst in Japan, and I have been trying to get the lead to break ever since. So far, I have been unsuccessful, which only speaks to the pencils quality.

The final mechanism is the Kuru Toga from Mitsubishi Pencil’s Uni line. These pencils have a mechanism that rotates the lead 9° counter-clockwise every time one presses it against a hard surface. This leads to the wear being distributed evenly, creating finer lines and requiring fewer button presses, prolonging the leads life span. I have quite a few of these in various lead widths, as well as one that rotates the lead 18° instead of the usual 9, which is better for writing in the Latin alphabet, as each character has fewer total strokes. One can see the shaft being rotated with every lift, which is surprisingly satisfying. 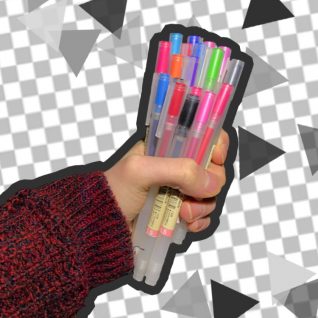 You can find Japanese pens at literally every single stationery store. I particularly like several Pilot series, including the Pilot G-2 collection, and the V5/V7 collection, as it is very inexpensive and has very smooth ink. Mitsubishi Pencil’s Uniball Eye series is both smooth and clear, as well as water and light proof. It can take some time to dry though, so keep that in mind.

The reigning champion of gel pens is clearly Muji though. Their Gel Ink Pens come in 12 colours and 3 widths; 0.38mm, 0.5mm and 0.7mm. In Japan they cost 80¥, which is 0,75$ or 0.60€. They are smooth, don’t dry out and come in vibrant, beautiful colours. They also don’t smudge, which is really useful. In my opinion, they also just look pretty cool.

The other common type of gel pen in Japan is Pilot’s Frixion series. They range from the regular Frixion Ball pens to Frixion Light and Light Soft, Pilot’s series of erasable highlighters. The pens have thermo-sensitive ink, which, when heated up, will become invisible. The erasing tip on the back-end of the pen causes the ink to heat up, causing the writing to disappear. 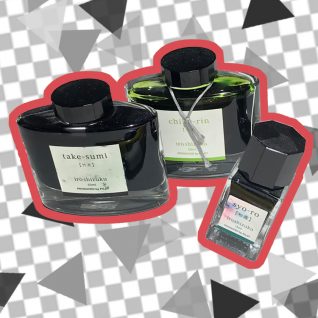 Fountain pens aren’t as common in Japan as they may be in the west, but that didn’t stop Japanese companies from making some exceptionally well crafted fountain pens. Brands like Pilot, Sailor and Platinum each a vast collection of fountain pens. I own the Pilot Metropolitan, or Pilot Cocoon as it is called in Japan, in black, and for its very affordable price, it creates smooth, neat writing. I am also saving up for a Pilot Vanishing Point Fountain Pen, but that will probably still take some time.

When it comes to Japanese fountain pen ink, you can really only recommend Pilot’s Iroshizuku series, which comes in 24 different colours and performs well across the bar. I own 3 bottles, a small Syo-ro [Pine Tree], a beautiful mossy turquoise, Chiku-rin [Bamboo Forest], a vibrant green, and Take-sumi [Bamboo Charcoal], which is the most vivid, dark black that I have found to date. The bottles are beautiful and, at least in Japan, are reasonably priced.

Even if you don’t use a fountain pen, this ink can be used for dip/manga pens, which one can find at almost every stationery or manga store. 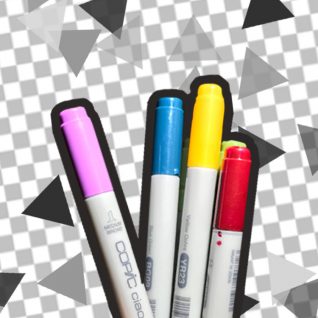 Copic Markers are refillable, alcohol based markers that have vibrant colours and are blendable. They were developed for the manga industry, and have defined the signature style of coloured manga illustrations. The sketch series is available in 358 colours, the classic series in 214, and the more affordable Copic Ciao series in 180.  There are also Copic Wides, which have a roughly 2cm wide flat barrel and are available in 36 colours.

As a big fan of Japanese calligraphy and lettering in general, Japan had a lot to offer. The Pental Pocket Brush Pen is a great alternative to a Japanese calligraphy brush, offering a very dark, smooth ink and an elegant design. For vibrant colours, the Tombow Dual Brush Pens come in 96 different colours and have a really nice, flexible nib, which is not quite as soft and brush like as the Pental Pocket Brush Pen, but still very nice. Akashiya Fude offers Akashiya Sai brush pens, which are water based and have a tip that really feels like a calligraphy brush. They last a long time and come in beautiful colours.

Here’s where things get interesting. Washi tape actually comes from Japan, and is called masking tape [マスキングテープ] or just maste [マステ]. Washi is actually a traditional type of Japanese paper, and has little to do with what we call washi tape. 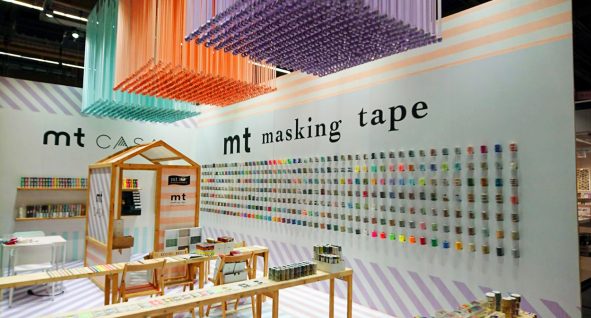 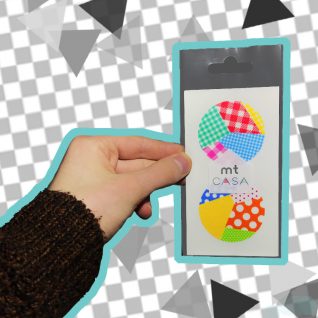 MT masking tape also offers MT Casa, a series of wider tapes and sticker sheets to decorate one’s room. Including MT Casa fleece and MT Casa shade, which can be applied to windows and other transparent surfaces.

One can use washi tape for a variety of things, from hanging stuff on your walls – the adhesive doesn’t damage the wall – to decorating things. One can also use the tape to label things and create tabs and bookmarks, as one can easily write on the tape.

Over the next few weeks I will be creating another post dedicated to MT masking tape, as I own roughly 300 roles of tape and people keep asking me what I use them for, so keep a look out for that.

It also motivates me to study more if my notes are pretty, and MT is great for just that. Bullet Journaling is also a lot of fun and you can always use tapes to scrap book things. 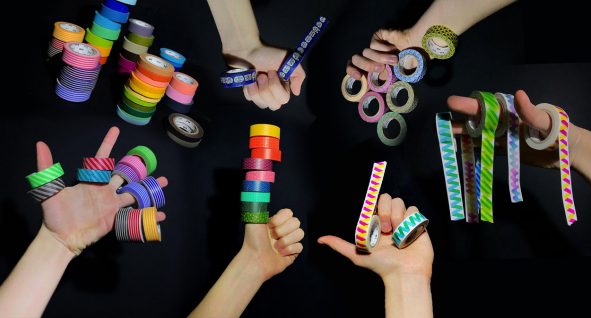 Some of my MT tapes

I hope you liked this rather long listing of Japanese stationery items. There will probably be a part 2 sometime soon, as I have a bunch of unique items still to share.

If you have enjoyed this, consider sharing it on social media or following the blog through RSS,

until next time,
send a postcard,
Yona

* Disclaimer:
I do not make any money from any of the links above, they are just here for your convenience.
All images are mine unless otherwise stated in the image caption.