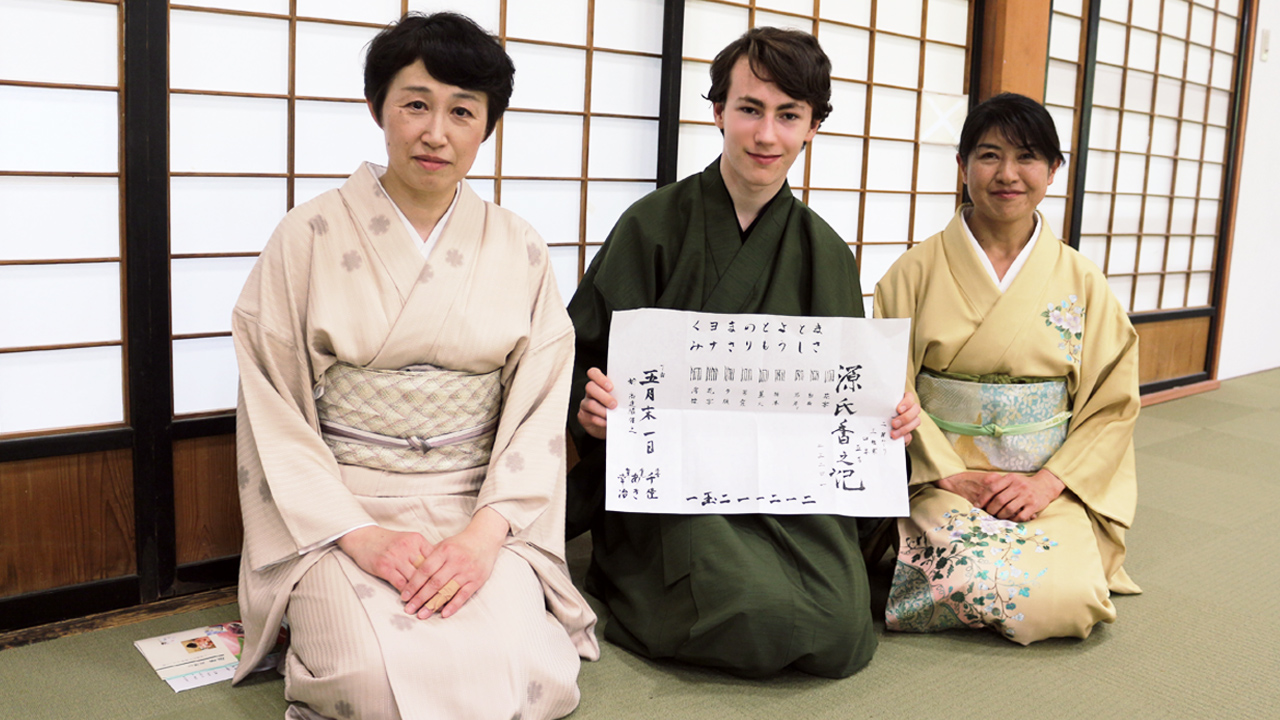 Kodō – the Way of Incense

There are quite a few Japanese traditions that are translated to “the way of …”, from Sadō [茶道 – The Way of Tea/Tea Ceremony] over Kadō [華道 – The Way of Flowers/Flower Arrangement] all the way to Shodō [書道 – The Way of Calligraphy], the lattermost being what I practice in Club at school.

The above, along with sports such as Judō, Kendō and Kyudō make up the most common of the 道 [Dō], but there are myriad of less famous yet just as fascinating traditional arts out there that I believe deserve more attention. One of them, as you may have already guessed by the title of this blog post, is “The Way of Incense” – 香道 [Kodō].

Kodō is now one of the lesser well known 道 [Dō], with the majority of Japanese people not knowing what it is. I visited an elderly home yesterday and talked with quite a few senior citizens, almost all of whom did not know Kodō. This is especially sad considering that Kodō used to be one of the most popular, still being considered one of the three classical Japanese arts of refinement alongside flower arrangement and calligraphy.

Kodō, just like almost all Japanese arts, is really quite old and has it’s roots in China. Although there are a few legends surrounding how incense wood, agarwood, first came to Japan, first references found at the start of the 6th century CE, around the same time Buddhism was brought to Japan.  Burning incense became a staple tradition within Japanese culture, especially during religious ceremonies. Incense was also a large part of court life in the Heian Period [794–1185]. It is also featured heavily in The Tale of Genji, one of, if not the first Japanese novel, written in the early 11th century.

The Tale of Genji actually plays a role in one of the Kodō games, but I am getting ahead of myself.

An appreciation for incense could also be found with Samurai, as, during the end of the Muromachi period [1336–1573] the ancient regimes and class structure slowly began to fall apart. At the end of the Muromachi period, the art of Kodō, burning fragrant wood would be developed. This form, with all of it’s mannerisms and structures, remains largely intact today. In the Tensho era, the Ten Virtues of Kō [香の十徳] were established, listing the correct use of incense and the benefit reaped thereof, listing things such as; 1. Sharpens the senses; 5. Heals loneliness; 7. Is not unpleasant, even in abundance.

Kodō is practiced in complete silence. Similarly to Tea Ceremony, there is a host/hostess [亭主] and a person who prepares the incense [香元]. Ideally 10, in my case 7 guests sit in a U shape in a traditional tatami room. The honorary guest sits to the left of the incense presenter.

I apologize for the poor image quality, I tried to recreate the calligraphy setup at home | Incense Burner © wikimedia commons

The objective of the incense game, called monkō [聞香], is to guess which of the incense burners contains the same incense. Interestingly, the first character 聞 is actually listen, not smell, so monkō could be translated to “listening to incense”. The latter being the Ko in Kodō. Five incense burners are passed by one by one, the objective being to determine at the end which of the fragrances were the same.

The ceremony starts with every participant writing their name on a tiny piece of paper, women in hiragana, men in kanji, foreigners in katakana. The paper is used to document one’s findings later. Grinding the ink stone before writing can be quite time consuming, yet it is a process I have become accustomed to after joining calligraphy club.

Each incense burner is passed by only once, and one can inhale the fragrance 3 times before passing it on to the next person. Like during tea ceremony, the cup is rotated 180 degrees before and after inhaling. To correctly hold the burner you must rest it on your left hand, fixating it at the top with your thumb, while cupping your right hand on top to channel the scent. Hold the cup to your nose while keeping the cup horizontal at all times.

After the last burner has been passed along, participants write their guesses on the paper on which they wrote their name earlier. Simply unfold the paper and write on the third column from the right. We received a copy of all of the possible combinations and their names. The combinations are named after the chapters in The Tale of Genji, which I mentioned earlier. The beams are counted from the right, so the example [which was the correct answer during the ceremony I attended] would signify that the first and third fragrance were the same.

Next, the host will gather all of the papers and begin writing the large calligraphy found in the header of this blog post. The large writing states the date and event, while the writing in the middle tells the participants and their guesses. In this case you would get 5 points for having all incense in the correct order, 1 for every beam in the correct place. All other guests only had 1 or 2 points, myself getting all 5, so I got to keep the calligraphy. It is actually surprisingly difficult to distinguish between scents after smelling each only once with a large amount of time in between. The ceremony took more than an hour.

And that is how I spent last Sunday. The venue for this event was actually Takato, which is where I took the video from my Hanami blog post. It has become quite a tradition for myself to apologize for the lack of frequent updates on here, a habit I am trying to break. This is becoming increasingly difficult as I only have more things to do, resulting in more things I wish to write about, and less time to do so. If all things go to plan though, I will be posting another post tomorrow to commemorate 9 months at a Japanese high school.

If you ever go to Japan, do try Kodō, it’s an incredibly interesting art that I truly believe deserves more recognition than it receives.

Until hopefully tomorrow,
send a postcard,