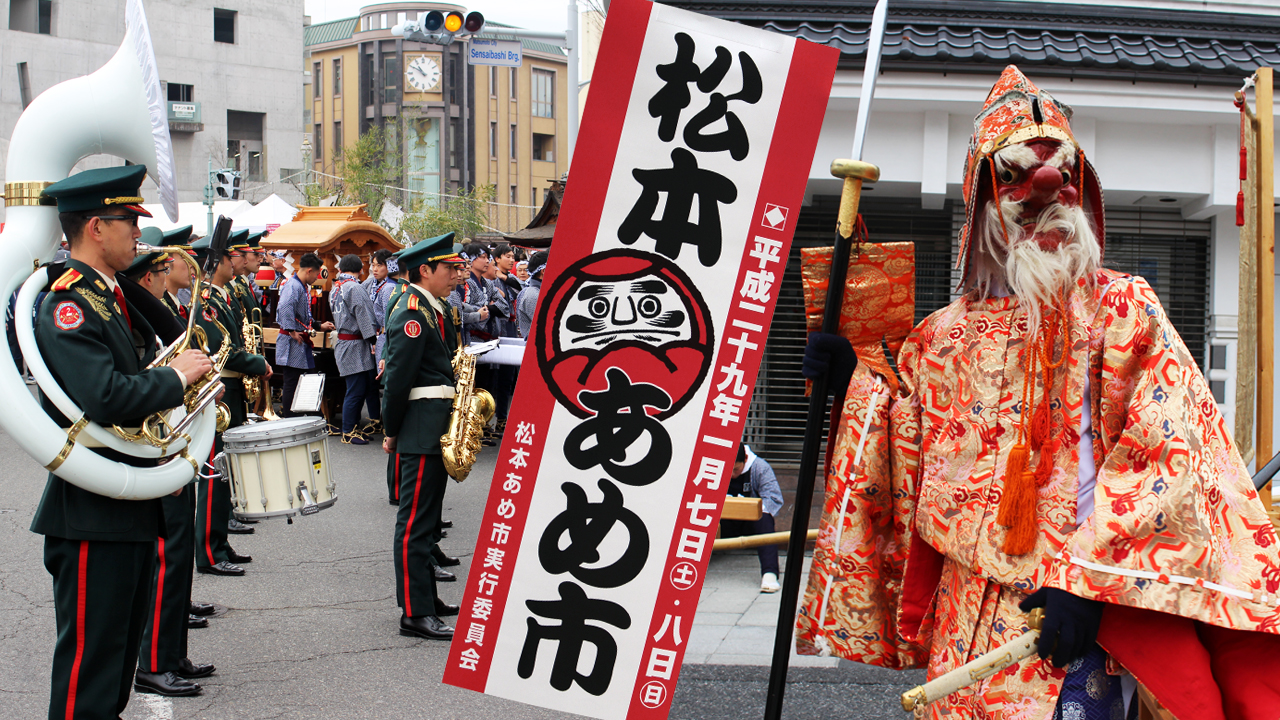 Ameichi is a festival in downtown Matsumoto, Ameichi [松本あめ市, Matsumoto Ameichi] is commonly translated to “Candy Festival”. In 2017 it was held on January 7th and 8th, with the main bulk of the activities on the 8th, which is the day I went. The internet doesn’t seem to offer much information on the English side of things, so I’ve decided to gather up a lot of information from attending the event itself, and from the Japanese side. It’s also sometimes called a street party, but I will stick to calling it a festival for this blog.

The festival was originally called Shioichi, the best translation I have found on the official Matsumoto tourism website, calling it Salt Market. You really cannot find a lot about this event on the English side of the internet, so the history below was summarized using several different Japanese websites. I hope it still makes sense.

The origin of the festival comes from when the late Hōjō clan boycotted salt supplies to the Kai Province in 1568. Uesugi Kenshin [上杉 謙信, Uesugi being the last name], after hearing about this, sent salt to his enemy/rival Takeda Shingen, who resides there, being quoted saying: “I do not fight with salt, but with the sword.” The date itself therefore commemorates the day salt arrived in Matsumoto.

The festival was later renamed Candy Festival for reasons unknown to me, and young children sell both candy and daruma dolls [which I talk a lot about in my New Years blog, which you should really check out].

It’s called “Candy Festival”. There is a lot of candy here. You can buy candy, you can eat candy. There is candy. Ok all terrible blog writing aside, yes, there are a ton of candy stalls. On the internet you will find a lot about children selling candy, and although I think I saw a few, there really weren’t many. In the picture on the left, you can see Shokunin, or Japanese candy sculpting, of which there is a nice youtube video of here. There really isn’t an awful lot to say about it really, it’s a street festival.

There are also many different activities and dances. For example, during the opening ceremony, such as many Mikoshi [神輿, portable Shinto Shrine] being carried around by groups of people. You can see them in the background of the image below, on the left.

There were also a lot of different mascots with whom you could take tons of pictures of, often with long queues to line, with a lot of little children and tourists lining up. There was also quite a nice samurai costume parade, which you can see a small bit of in the picture in the middle.

There were also a lot of dance performances, and I have filmed a few of them, please have a look, they were really cool:

There were also a few other dance performances that I recorded, and several more that I missed, with different dances and events around the clock. If you would like me to upload another dance, such as the one from the opening ceremony, let me know in the comments and I’ll upload it.

I really enjoyed this event, there was a lot to see and a lot to do, and even though it was freezing cold, it was quite fun. Also, they had special custom made badge pins and washi tape, which, if you follow me on social media [you should], you will know that I love both of those things. Thank you very much for reading, and I hope you’ve had a nice time since my last post, as it has been a while. If you have any questions about this festival or Japan in general, or would like me to cover a certain topic on this blog, feel free to ask questions in the comments, or, you could always