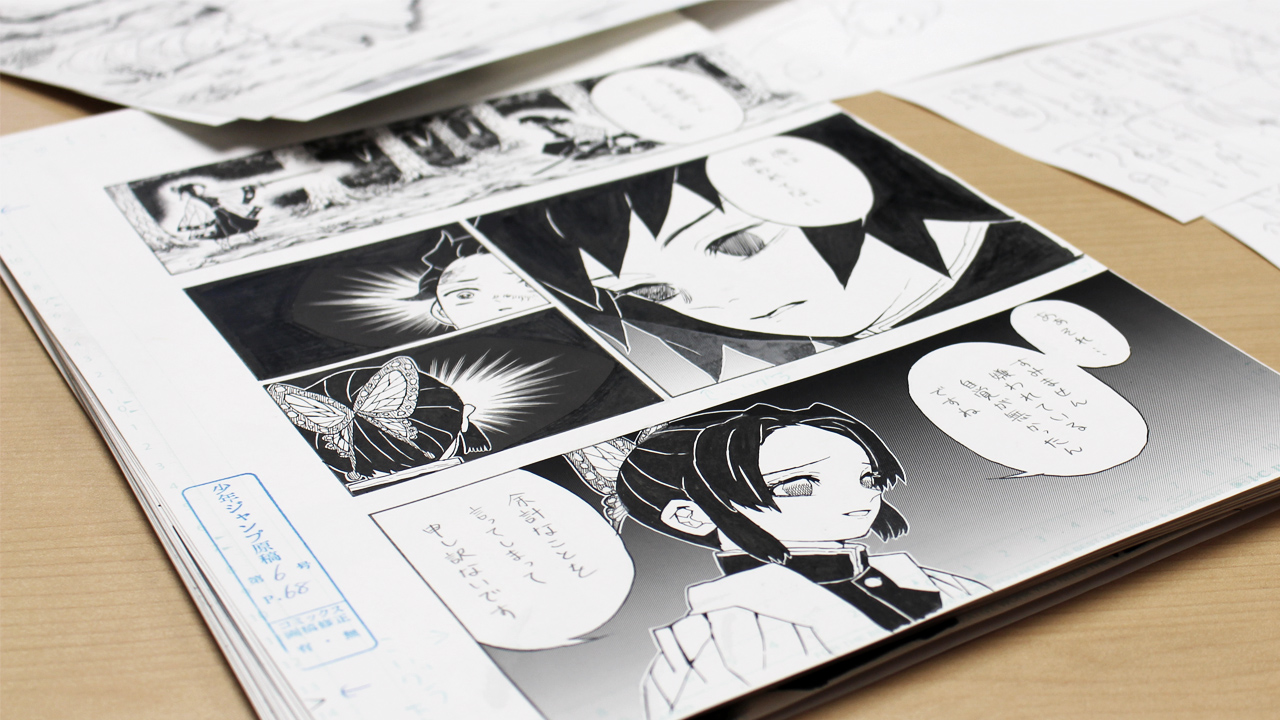 On January 23rd, AFS took me and a fellow exchange student to Tokyo on a culture trip, with highlights being things like the Ghibli Museum in Mitaka city, or a visit to the National Theater to see a Kabuki performance, and, although you can expect blog posts about both of those things in the following days, this blog is to focus on our trip to the Shueisha publishing offices, and more specifically, the sections in charge of weekly Shonen Jump and Young Jump. I learned all about publishing manga as well.

If you want to visit the company offices, the only place you can really see is the Shueisha Gallery in the ground floor, which shows some original art and special merchandise. If you are lucky, you can also see some statues and figurines on display. You’ll also be able to get some free stickers and clear files which is really nice.

The gallery is however just a really small part of the company, and this would be a very short blog post if that were all I was going to talk about. Instead I’m going to tell you about the rest of the building as well, since that is not only the part that one normally doesn’t have access to, but also the part that is way more interesting.

If you have every read the manga Bakuman, or seen the anime adaptation of it, the following images might seem a bit familiar, and that is mostly because these are the offices that the show bases its setting off of. If you haven’t read/seen it, and are interested in the manga making/publishing process, it is not only very entertaining, but also surprisingly accurate. As I am not allowed to show you anything inside the actual offices, simply look at the live-action Bakuman adaptation if interested.

These are the infamous Shonen Jump hallways, always updated with the newest posters and cardboard cutouts.

Inside the offices you will find rows upon rows of desks, each full of stacks of paper, old Jump volumes and lots and lots of merchandise. If my count was accurate/ I can accurately remember, Weekly Shonen Jump had around 3 rows of desks.

Along the side of the main offices were 3 rows of shelves, which could be moved sideways to get to the ones at the back. They had all volumes since the beginning over 50 years ago stored here, and I saw quite a few editors sitting back and reading manga, which I guess is part of the Job.

We got to talk to a few editors, including the editor of One Punch Man, published in Young Jump. He was super kind and gave us all kinds of presents, as did a few other people, so thank you all so much!

After we got a tour of the offices, an editor sat down with us in one of the meeting rooms to show us how a manga is made, from the name to the published work.

“It all begins with a name.” In manga publishing, these rough drafts or sketches are called names, and is the basis of most manga. If a mangaka [manga artist] is successful, they can use a name to pitch a new concept, instead of handing in a finished manuscript before getting a confirmation. There is a rough layout and the text is already placed. I got to see a few different names by different artists, and I can say that some are a lot prettier than others, the one above being somewhere in the middle.

After the name is approved by the editor, the mangaka goes and creates the manuscript, as seen above. If you look closely, you can see that the page on the left is the same as the name in the center of the above image. I got to see both this original manuscript, and one from One Piece, which was amazing, although I’m not allowed to show you that one. As you can see in the manuscript, the speech bubbles are all written in pencil. The mangaka draw most of the characters themselves, but most serialized mangakas have assistants that work on the backgrounds. A lot of screentone-sheets are also used, to create gradients and other effects like the ones on the left.

Next the editors and designers come into play, deciding what size the text should be, or what font to use where. A lot of corrections are made here, and you can see a lot of photo-copied sheets with red markings all over. The image on the left shows how the editors choose the font size, using a special overlay to count characters and how they would fit. The editor also gave me a trick to tell if the mangaka drew the manga traditionally or did it digitally, which is to look at the panels, if the lines are completely straight and there are perfect boxes, it was done digitally, which is happening more and more, and if there are slight inconsistencies, it was inked traditionally. You might also find some left over pencil markings.

There are quite a few Jump Shops in Tokyo, and the one we went to after our visit to the offices was the one next to Tokyo Dome. If you are a fan of any of the big manga, Dragon Ball, Naruto, One Piece, etc… you will find everything here, if you are a fan of lesser known mangas, you will still find a ton of merchandise. They also have a Haikyuu!! Purikura machine, Purikura being Japanese photo booths. There is so much stuff here, the only things stopping us exchange students was the space in our suitcases.

Well, thank you so much for reading, it’s been crazy hasn’t it, 3 posts in 4 days, that’s not something you should start expecting from me, although I will have at least 2 more posts in the following week, maybe even in the next 2 days if I can manage. Until then, why don’t you read some of my last posts like the one looking back at the first half of my stay. I hope you learned some things about the publishing industry in Japan, and, if you have a really good idea and can write in Japanese, Shueisha does take international submissions. Anyways, I hope you enjoyed reading this blog, and I’ll see you next time, until then,