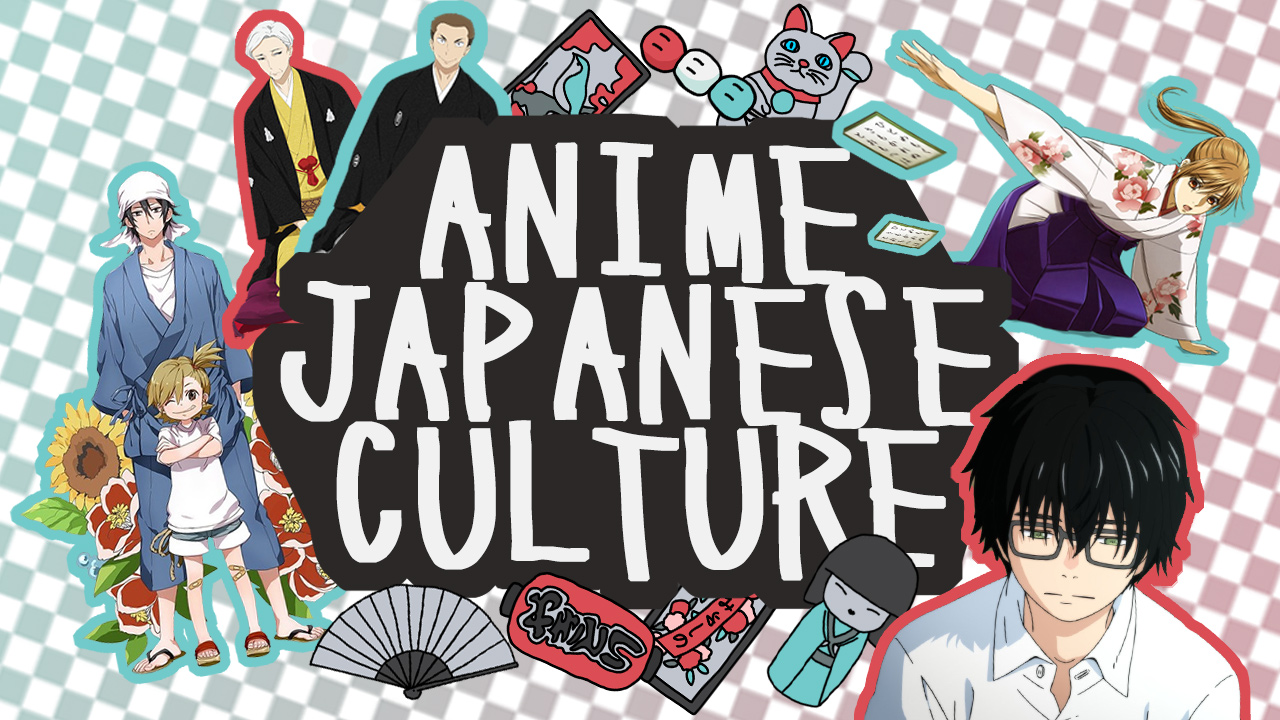 Anime is great. Japan is great. Learning stuff by watching TV is also cool, so here are my top 6 anime about Japanese culture. Each of them cover a different aspect of Japanese culture, be it a traditional board game or theatre form. They all heavily feature the aspect, although some aren’t exclusively about them. Enjoy! 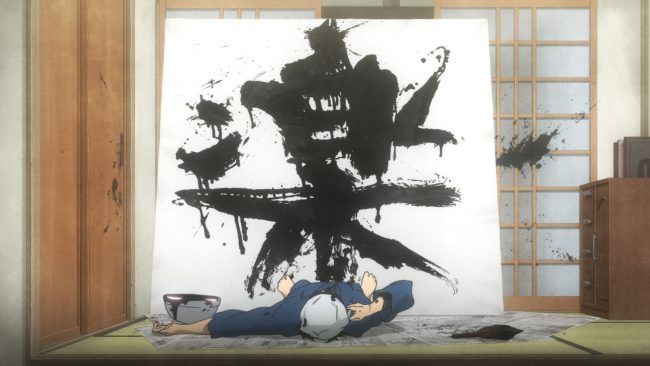 Now this is an adorable, happy little show. Barakamon isn’t as much about Japanese calligraphy than living on the Japanese countryside, but it is amazing nonetheless. The show follows Handa, a 23-year-old master calligrapher on his journey to find an own style and living up to his families expectations. He is sent to a remote island and perfects his calligraphy there while interacting with the local inhabitants. 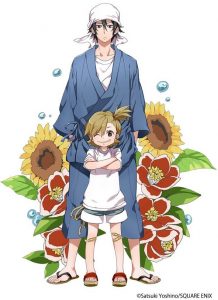 This is where the show really is at its strongest. His interactions with the villagers and the simple countryside life really make the show so enjoyable to watch. In addition, one learns a lot about various local traditions and customs. There’s something almost comforting about watching our protagonist live his life in rural Japan, coming to terms with the difficulties of his job, making new friends and finding a community where he can feel at home.

One of the highlights of the show is Naru Kotoishi, a quirky, loud, enervating little middle schooler who seems to never leave Handa’s side. She is such a ball of pure energy and I love her for it. Her facial expressions and poses are comedic gold and she brings life to an otherwise calmer slice-of-life show.

The original Manga was written and illustrated by Satsuki Yoshino. The anime adaptation was made by Kinema Citrus, who are known for Black Bullet and Made in Abyss. The animation and backgrounds are solid and the entire atmosphere created is simply exquisite.

With an 8.47 score on MyAnimeList and an 8.3 on IMDb, you can be sure that this one’s going to be good. And, if you’re still craving more, there is a prequel called Handa-kun that is really, really funny.

I love Chihayafuru. The show is about a high school Karuta club. They play Uta-garuta, or ‘poetry-karuta’, which is played using Hyakunin Isshu [百人一首], a set of 100 classical Japanese poems. I talked about Karuta briefly in my post about Japanese New Year, as it is traditionally played around that time.

In the show a young girl named Chihaya loves playing Karuta. After a new student joins her class who is an amazing Karuta player, she is inspired to start a school club called the Mizusawa Karuta Club.

The two seasons that have aired so far have 25 episodes each and are critically acclaimed. A third season is currently in the works and is set to air in 2019.

If you haven’t seen Mother’s Basement’s Video about Shouwa Genroku Rakugo Shinjuu yet, you should. Then you should go watch the anime itself. Rakugo is a lovely form of storytelling in Japan where a performer kneels on stage and tells a long story. The story can be humorous, and usually includes a dialogue.

Set in the past and the present, its a show about student and master, developing ones style and personal progress.

Shouwa Genroku Rakugo Shinjuu has a phenomenal average rating of 8.63 on MyAnimeList. It was praised by Nick Creamer for its  “Strong underlying narrative to gorgeous direction and top-tier performances.”

March Comes In Like A Lion is a heartbreaking story. The story focuses on Rei Kiriyama, a professional shogi player who, only 17-years old, lives alone in Tokyo. 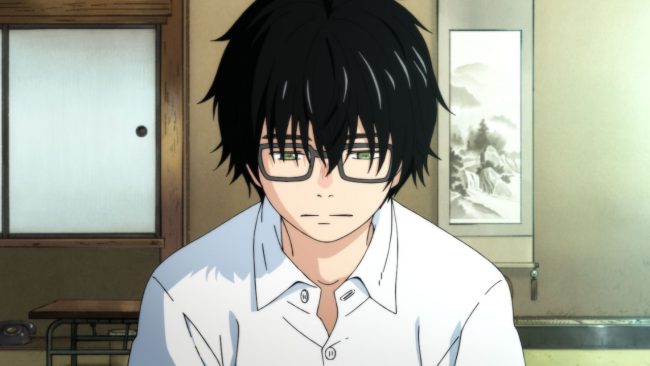 The show deals with social pressure and depressions, and is at times truly heartbreaking. You follow the protagonist through his personal and professional struggles. After arriving in Tokyo, he meets a family of three sisters living with their grandmother. Although they have their own struggles, they help Rei cope with his struggles together as a family. 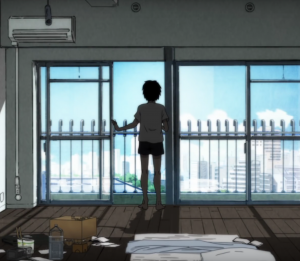 The slow pacing gives a more authentic atmosphere and really sucks you in. The animation and character design fit the tone and are truly stunning. You really connect with each and every one of the characters and start rooting for them to succeed.

Plus, there is a whole lot of shogi playing and rivalry. From competitions to tireless practice, if you love the game, this show is for you.

3-gatso no Lion has 2 seasons with 22 episodes each and a live action adaptation. Of course there is also a manga that preceded it with 13 volumes.
Season 1 has a 8.43 average rating on MyAnimeList and Season 2s average is 9.06, making it the 8th highest ranked show on the website as of writing.

Go is hard. If you ever want to know how to play it, here’s a 75 episode long series about go. All of the characters are obsessed with go. Yet this show has so little filler, it’s 75 episodes stock full of love and admiration for the board game.

The show is about Shindou Hikaru, a 12-year-old student. After he discovers an old Go board in his grandfather’s attic, he is possessed by the spirit of an expert Go player. Hikaru lets the spirit play Go through him. On a quest for the perfect game, “The Hand of God”, the show is full of drama, ups and downs and Go. A lot of Go.

Based on the manga by Yumi Hotta and Takeshi Obata, the anime has a 8.17 average rating on MyAnimeList.

If you’ve ever read anything on this blog, you will probably know that I love Kabuki theatre. The next anime about Japanese culture is a show about pretty boys doing pretty things™. 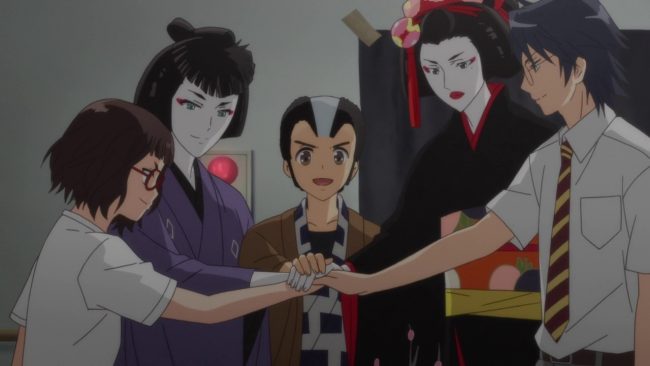 It’s a lighthearted and simple show, and the premise is fun. Kurogu, a high school student, is obsessed with Kabuki theatre and wants to start a club. He persuades his friends to join, teaches them the basics and has a lot of fun. There is not a lot to say about the show, and looking at the reviews, it’s a hit or miss.

Sadly, the characters in this one fall a bit flat, with the protagonist being pretty dull. The twelve episodes go by quickly enough though and one does learn a bit about Kabuki.

And that is all I have time for today! I hope you enjoyed this little overview on anime about Japanese culture. There are many more that didn’t fit onto this list, so if I missed your favourite, do leave a comment down below. Have you seen any of these shows, and if yes, would you recommend any of them?