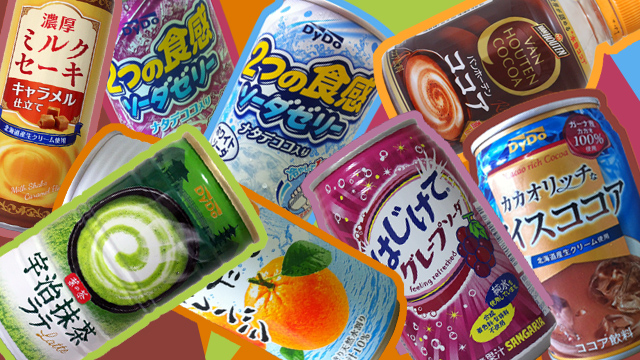 Hello internet! Today is the 3 month mark of my stay, which a) makes me really happy, and b) oh god where has my time gone, I’m leaving soon and I don’t wanna go. Ok, last point I promised you a more elaborate post this time, and here you go, a review of some of my favourite [+less favourite] drinks I’ve tried so far.

Explanations: I made some graphics for each drink using some photographs I took, sometimes the quality is really bad because I took them with my old phone instead of my camera.
The categories are:

Flavour: I don’t think I really need to explain this, how do I like the taste?
Special: How special is this drink [from a western viewpoint/my personal viewpoint.]
Price: The higher this is, the cheaper [considering the size of the drink as well]
Important: The prices at the vending machines are between 30-50¥ [roughly 25-45 cents] cheaper than the average price. Vending machine prices vary a lot depending on where they are, and the prices are also different at the convenience stores.
Overall: …I think you get it.

So, today, I’ll share with you the first 10 drinks.

This drink seems to be one of the most popular. I would say it is for 2 to 3 reasons. Mainly, it is really rather cheap considering its size. Really, really cheap. It’s orange juice with fruit bits in it but it’s also really refreshing and cold. Judging by how almost every second can in the trashcan is this drink it seems like a safe choice. It’s just orange juice though, so not very special. Still good though. Overall, I quite like it.

I really like this drink. I really like this drink a  lot. The second one mostly, not really the first. No, also the first, although I must say, I will always go for the second when given the chance. This drink is strange, as it isn’t really a drink, it’s more like a semi-liquid jelly that is somehow drinkable. It also has little chunks of harder jelly in it. The grape flavour is really nice, to a lesser extent the soda too. The soda tastes way to much like vanilla to me and I don’t know why, maybe my taste buds are strange. Anyways, the 2 Texture Soda Jelly by Dydo [pronounced Dido, as in Dye and Dough] is most likely my favourite drink on this list. Continue reading anyways will you.

This is a drink that I haven’t seen in many places. I got it at the Hyaku-En store (100¥ Store). These were 2 drinks for 100¥. There is something about the melon flavoured one that is really really good. Most melon drinks are super sweet and taste like something in between Bubblegum and Sugar. This one is still insanely sweet, yet somehow it manages to taste like actual melon, so good job Sangaria. [Side note, it took me over an hour to find your logo for the graphic in a usable quality, Sangaria, please fix that won’t you.] The grape one is also really good though, especially compared to all of the other grape drinks I’ve tried that are a lot more expensive. [You’ll get those in part 2, promise!]

This drink is overall not that bad. It’s not really very expensive, it’s not really that special though. The flavour is rather unique though, and it would get higher marks if not for one thing. It’s waaaaay to sweet. “But Yona, it’s a caramel drink, what do you expect?” you may ask yourself, and to that I say two things, a) thank you for using the proper quotation marks, these things ” ” just won’t do, and b) even with my expectations set to really sweet, this was still very very sweet, so if you are a sweet tooth, this is for you, if not, it’s not I guess.

Again by Dydo, as most of the drinks on this list are [the vending machine closest to my classroom is Dydo, that’s why.]. I usually don’t drink coffee, nor do I particularly like it in general. This was an accidental purchase, I was wanting to buy the drink right below this one and pushed the wrong button. It’s not really that special, it’s coffee, it seems ok. It’s a really big can though so really inexpensive all things considered. Also, it’s hot!

I really like this drink. I like it a lot. It’s a bit pricy considering how tiny the can is, but still it’s good. It’s one of the hot drinks in the vending machine, so perfect when you are freezing because school is either not heated or heated to such a minimal extent that it has no effect on your well-being. If you haven’t tried matcha yet and are in Japan, first of all what is wrong with you, and secondly, this may be a good gateway. Matcha normally is rather bitter [but really good], yet this is quite sweet. A bit too sweet for me but it seems to be popular. Try it, it’s Dydo.

I don’t like this drink. I don’t like it for many reasons. It’s not the biggest of cans, and it’s not the best of cocoa drinks. Maybe the image shown on the can should have been an indication but this drink tastes way to watery to be good cocoa and way to cocoay to be good water… There is a lot of good cocoa drinks in Japan, this one, unfortunately is not one of them.

This is good cocoa. Expensive cocoa, but good cocoa. It comes in 2 kinds, a carton and a pet bottle, the pet bottle being hot. The graphic above reviews the hot version. I must say I vastly prefer this drink cold, as it tastes less sweet and more like cocoa. If your hands are freezing, maybe really cold drinks may not be the best though. Out of all of the cocoa drinks I’ve had since coming here, this one is still the best. Also, it’s not Dydo, it’s Asahi.

That would be all for today I am afraid. Here’s 10 drinks I have tried since coming to Japan. There’s another 20 or so on a waiting list since making those graphics just takes up too much time. It’s been a really crazy 3 months and I am so happy I am here. If you learned anything from the information above, it would be that it is cold here, I’m picky about cocoa drinks, and everything seems to be too sweet. Anyways, the word count is reaching my usual 1200 words, which somehow always marks the end of my blogs. I wouldn’t want to mess that up by changing the way I write my blogs now would I?

See you all hopefully soon, as I don’t have club for the next 10 days and therefor can write more about all the crazy stuff that has been going on, like club,

until then,
why don’t you
send a postcard,