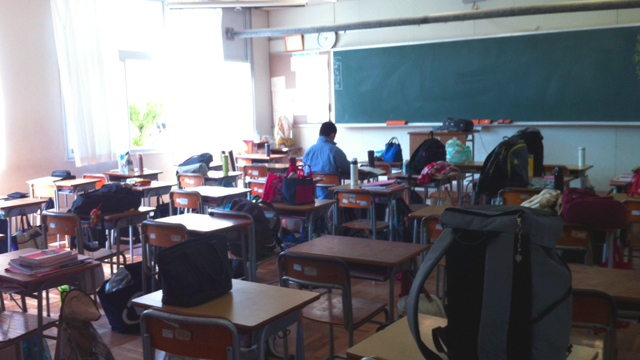 As mentioned in Post #6, here are my thoughts and impressions on school life in Japan, as well as a rough idea of how my school life looks like everyday. Also I would like to apologize for the poor image quality, I took all of these with my phone instead of with my camera since I don’t wanna shove a camera in everyone’s faces.

Ok, the title may seem a little bit misleading, and can be read in many different ways, but I think it fits very well with what I am trying to say. First of all, I am surprised at how far ahead Austria is in terms of Math, Health and Chemistry classes. This headstart makes it very easy for me to understand what is being said, learning Japanese through the subject instead of the other way round. Also in other subjects, such as English (all 3 types of English classes, more about that later) and the like, even if the language being spoken is Japanese, I can follow or at least piece together what is being said.  Understanding a lesson is one of the most important parts of a lesson not being boring.

The second way this title is to be read as is that Japanese Schools aren’t at all the strict, conformative schools the internet/western world tells you about, at least not all of them and certainly not mine. Here would be the place I insert a cute picture of my school uniform and tell you about the strict rules about attire, however, my school doesn’t even have a uniform. Let me repeat that, a normal public school in Japan that doesn’t have a uniform. Apparently that isn’t very uncommon either, since my fellow AFSers don’t have school uniforms at their schools. Also, people do wear nail polish and accessories, but there are some rules about hair length I think.

Everybody in my class is self-proclaimed crazy, which makes school so much more enjoyable. The teachers all seem to have a sense of humor, which is also an unexpected but very positive surprise. My math teacher is the most fun and also crazy (also self-proclaimed)

Ok ok ok, the above image is a lie, a big fat lie. I don’t even know how I managed to catch a train that is this empty, probably since I went at a time nobody in would commute. Just imagine this train being full of people, like, a lot a lot of people.

My morning schedule looks somewhat like this: I wake up at around 6am everyday and get ready for school. I eat breakfast with my host family and pack my bag etc. etc.. They see me off at the door shortly before 7am, bento bag in hand, backpack, well on my back and train ticket in my pocket. It takes me a little under 20min to walk to the station, which is where I meet two fellow classmates. We catch the train shortly after 7:20, and get off at maybe 7:40. The final stretch of my commute to school is a 30min walk in direct sunlight, always going straight. It is hot, and there are a lot of people walking this stretch as there are many schools in close proximity to each other.

The way subjects are taught in Japan vary vastly from Austria, in Japan the teacher stands at the front of the classroom and speaks for 55min straight, rarely ever asking any questions and when assigning a task often presenting the answers without asking any students for them. The students are silent, well, in my case they are either chatting or sleeping, the latter being very silent, the former not so much. As my class is an “English Class”, we have a lot of different types of English lessons. We have communication English, expression English and special English, I always confuse which is which so if I misuse any of the names, please forgive me. One of the above is taught by LTs, or Language Teachers, who are native. We have to very friendly LTs, one being from America and the other from Jamaica. This is the lesson we use to practice speaking, as the other two are very focused on reading and writing, as well as building vocabulary. The second type of English is expression English I believe, we spend most of the lesson reading out lists of vocabulary and using the language shadowing technique, repeating the pronunciation after a CD. I am not sure how effective just reading out these words is, as the context sentences given are usually very vague and I would have difficulty understanding how to use some of the words just by the usage explanation given. Furthermore, some of the vocabulary provided is very advanced, especially for students who can barely manage to hold a casual conversation. The third type of English lesson is used for studying grammar points.

There are three subjects in which I do not understand a word that is spoken, which are Japanese, Japanese History and Old Japanese (Kobun/Koten). The latter two even provide many difficulties for Japanese students as the kanji used are very difficult. We have maybe 7 or 8 Old Japanese textbooks, and I usually just stare at the blackboard for an hour since I don’t understand a thing.

Ok, this is a little bit out of place here but I think it is worth mentioning. During my two weeks here, two people celebrated their birthday in my class (we are 43 students including me). In Austria, you would get some happy birthday wishes, maybe your best friend gives you some chocolate, and that would be it, but not in Japan. In Japan you get so much candy you have difficulties carrying it all home. One of the girls allowed me to take a photograph of all of the candy… so much candy.

Our school is huge, there are 8 classes per grade, and 3 grades in high school in Japan, so there is a total of 24 classes I think. Most classes have around 40 students in them, ours being exceptionally big with 43 students, myself being number 43. This is often a problem since the school was designed for a maximum of 42 students per class, so some rooms, where the desks are numbered, only have 42 desks in them. Our school has an air conditioning, but this seems to be an exception as for what I have read online, most schools don’t have this. Each subject has its own staff room, so there are a lot of rooms in our school. The school also has its own pool and a huge gym.

Something I really like about the school is how clean it is. This is due to the fact that students have to clean the school everyday after lunch break. For the first few weeks, my group is assigned the English teachers staff room, and cleaning consists of sweeping the floors and emptying the trash.

So, all in all Japanese School life is very stressful. Lessons usually end at 4pm, but afterwards there are club activities, which I will talk about at a later date, since they deserve their own post. I wanted to get this post out yesterday as it was the first day of school for people in Vienna, and I wish you all the best. Have a good year, but not too much fun without me.

I’ll be sure to
send a postcard,
Yona