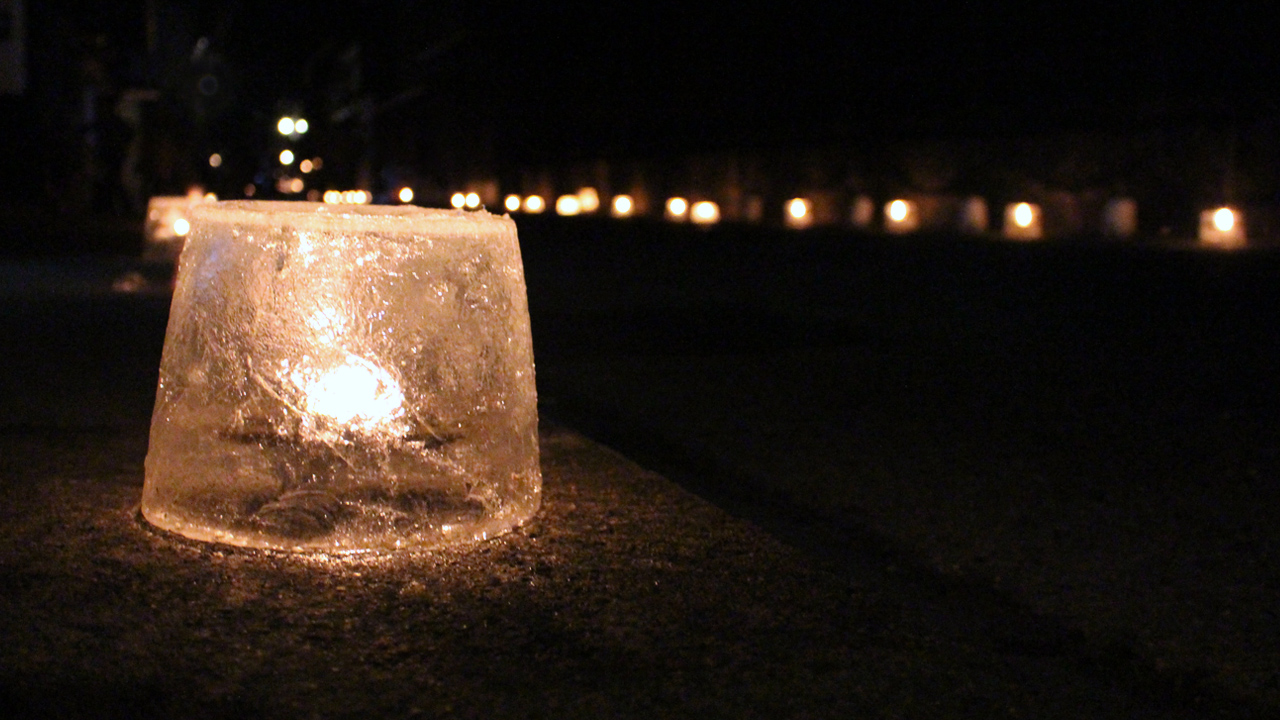 There are festivals in Japan that are big, loud, and really exciting. They have dances, live music and lots of fire. This is not one of them. the Narai-juku Ice Candle Festival is not one of them. Located in, as the name might suggest, Narai-juku, a small little town full of Edo-Period houses, which is designated as an Important Preservation District for Group of Traditional Buildings. Narai-juku is located in Shiojiri, a small city in the Nagano prefecture. I visited it shortly after coming to Japan, so it was nice getting to see it again in the winter.

On February 3rd every year, the Ice Candle Matsuri or Ice Candle Festival is held in Narai-Juku. There are quite a few different Ice Candle Festivals in Japan, this one being one of the most famous [according to a quick google search.] It seems to be a local initiative, as all of the store-owners were tending to the candles and greeting people as they walked by.

It can be quite cold in Nagano, especially in winter, and you can easily expect subzero temperatures, as cold as -10°C. There will likely be snow and a lot of ice, so if you ever plan on attending, be careful.

It will also be very dark, and that is something I should have considered before going, as my camera isn’t the best for low-light situations. It seemed like it was mostly people from the surrounding communities attending, and they were all smart enough to bring a tripod to stabilize their images. It seemed like everybody there had a fancy camera and a tripod. There is something inherently Japanese about an elderly lady using a tripod as a walking stick.

Many of the shops made special candles

There is something I found fascinating about this event. As I mentioned in the introduction it isn’t loud and fun and exciting, yet it still had this amazing atmosphere. It was an incredibly quiet and peaceful event. There were quite a lot of people there, yet there was no shouting, no music, no arguing. It was really, really quiet. Even at the stalls that handed out stew and alcoholic beverages for free, it was still tranquil. Nobody was cutting the line, nobody was in a hurry, everything seemed to be at peace. It was also pitch black, which only added to this strange feeling. The festival ended with a very small 2 minute fireworks display.

There was something “magical” about the atmosphere

Well, thank you very much for reading, and I am sorry this post is a bit late, I was going to write this up on the day of the event, but I simply forgot to. While waiting for the fireworks display to start, my host family went to a small local cafe that was run by three ladies who were chatting with each other and drinking red wine. It was a really small space and for the most part we were the only guests. It had a similarly peaceful feeling to it. I hope this blog showed you a different side to Japanese festivals, as my last few posts, like the one about Ameichi in Matsumoto, the one on Onbashira Festival or the one about the Fireworks Festival all focused on the big, loud events. I hope I’ll be more consistent with writing posts in the future, but, who are we kidding, I think you have all come to expect these to be at random times in the night at inconsistent intervals, so why break character?