5 Reasons why Japanese Konbini are Amazing

Convenience stores, called コンビニ [konbini], are everywhere in Japan. Where I am from, these kinds of 24/7 [or, to be exact, 7/11] stores don’t really exist, and it was such a change to suddenly have several awesome little shops on my way to school. Six of them –  a Circle K, two FamilyMarts and three 7-Eleven. Some of these tips and benefits apply to all three konbini chains, as well as Lawson and Daily etc, and some only apply to 7-Eleven, as I spent most of my time there.

I spent a year in Japan, and during that period I did not have any internet on my phone. Hence, having easily accessible wifi in 7-Elevens and FamilyMarts saved me so many times. I can’t tell you how many times I was saved by being able to text my friends from the train station konbini, especially since punctuality is so important in Japan. The WiFi at 7-Elevens is really good, and, even though signing up can be a bit tricky, that at FamilyMart as well. I’m sure other convenience stores also have free WiFi, so just walk past and check. 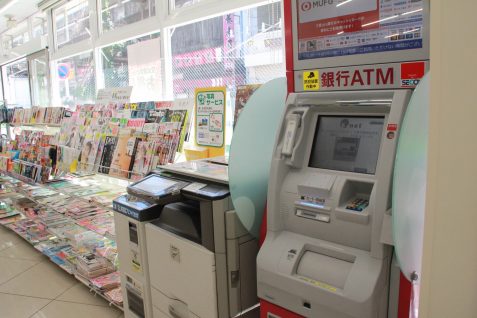 The ATM at FamilyMart // © Luna Woelle

When I first came to Japan, I spent about a week searching for an ATM that would accept my card, since most banks and even post offices [which still claim they do] don’t take international cards. Due to strict regulations in Japan, opening a bank account is also practically impossible for a foreign resident. In comes Seven Bank. Seven Bank is part of Seven & I Holdings, Co., and hence is available at all 7-Eleven stores and many other large train or bus terminals. Not only does the ATM take all cards, they are also open 24/7, which, surprisingly, isn’t actually a given there. ATMs have a closing time in Japan, which surprised me when I first came.

FamilyMart also offers international ATMs, but somehow I couldn’t get my card to work there, so 7-Eleven is your best bet.

Next to the ATM machine at almost all konbinis, there is another machine where you can purchase tickets for various events and museums. 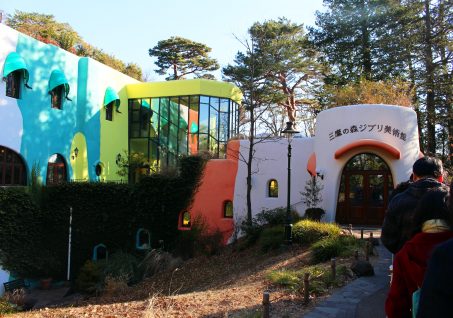 Tickets for the Studio Ghibli Museum purchased at a konbini

They are a bit difficult to use at first, but most of them can be switched to English. The staff are usually really helpful, be it in Japanese only.

During my stay I took the JLPT Japanese exam. I had to sign up online and after receiving a code, I used that to pay at one of these machines. You can also buy tickets to the Studio Ghibli museum in Mitaka if you are early and lucky enough. There are full guides on how to do that online as well.

Already at point nr. 4 and this is the first time I’m mentioning what konbini are actually used for. Thinking of Japanese cuisine, convenience store food in plastic wrap may not come to mind at first, but hear me out. Especially if you are on a strict budget or on a tight schedule, the full meals you can get are surprisingly good. With prices starting at 108¥, there is something for everybody – Western and Japanese Cuisine. I’m a big fan of the onigiri selection at 7-Eleven. As a high school student, I spent my time wisely by trying each and every flavour. If you go there late at night, a lot of the food may be percentages off as well, which is a huge plus.

Unsurprisingly, but convenience stores sell things like phone chargers and toothbrushes. This has come in handy a lot when traveling. Something you may not know however is that most konbini also carry stationery from Loft or Muji. I am currently writing this blog post in a Muji notebook with a Muji gel pen.  So it is safe to say that I love the brand. Here’s a full guide on Japanese Stationery.

And that’s about it for this week, I hope you enjoyed this little overview about why I love konbini in Japan. I’ve been sticking to my blogging schedule these past few weeks, and will hopefully be back next week again.

Until then,
send a postcard,
Yona

P.S. All photos of the konbini were taken by my good friend Luna – you can go follow her over on Instagram. Turns out that even though I took over 15.000 photographs in Japan, none of them were of convenience stores.