The Tanabata Festival is a traditional Japanese festival held every year around July 7th.  たなばた [七夕, Tanabata], meaning ‘the evening of the seventh’ in Japanese, is also called Star Festival. It is one of the five traditional seasonal festivals in Japan, called Gosekku [五節句] .The festival itself is accompanied by a beautiful story of two star-struck lovers separated by the Milky Way. 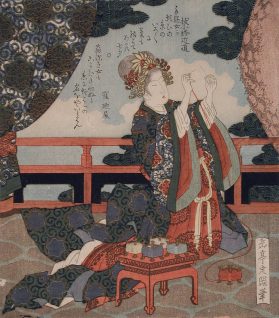 The weaving Princess Orihama [織姫], wove beautiful clothes by the riverbanks of the Milky Way*. Her Father, Tentai [天帝], the Sky King, loved these clothes, which made Orihama work very hard to make them. She worked tirelessly day after day, longing for company. Her father wasn’t a cruel man, and decided to arrange a meeting between his daughter and Hikoboshi [彦星], the cowherd, who lived on the other side of the Milky Way. They fell in love instantly and soon got married.

Tentai noticed however that Orihama started neglecting her duties as seamstress and Hikoboshi stopped caring for his cows. The Sky King decided to separate the two again on opposite sides of the river, making them unable to meet. Longing for her Husband, Orihama managed to convince her father to let them meet once a year, on the seventh day of the seventh month, on the condition that she dutifully continued with her sewing.

Since there is no bridge across the Milky Way, a flock of magpies came to make a bridge. If, however, it rains during this day, the birds will not come. The two lovers are then unable to meet and are forced to wait another year.

s* The Milky Way [天の川 – Amanogawa] is a river in Japanese. 川 [Kawa] is the Japanese character for river.

Tanabata was originally a Chinese festival, and was first brought to Japan in 755, during the Nara Period. It started out as a small weaving festival for young women. The imperial court held poetry competitions to celebrate the event. The story then evolved, incorporating many different Japanese tales to create the story told today. It first gained widespread popularity during the Edo Period. During this time the custom of Tanzaku [短冊] was established.

The Star Festival is a time where wishes are made. People often visit the local shrine or temple, or wherever the festivities are being held. Since it’s summer, most people come in Yukata.
Since the festival is held on July 7th, seven different kinds of decoration are used. 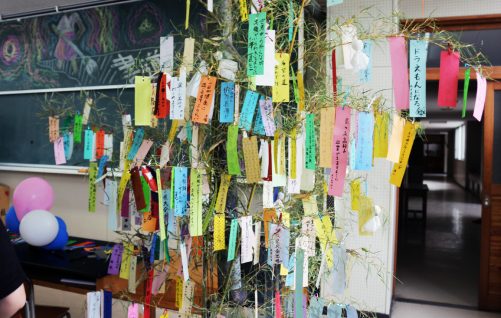 Tanzaku at our school

Tanabata features heavily in various media, be it in poetry [There are 137 poems by Kakinomoto no Hitomaro in the Manyoshu collection] or film [The 2010 Karate Kid movie tells the Chinese tale]. Several episodes of Steins;Gate also heavily feature Tanabata. 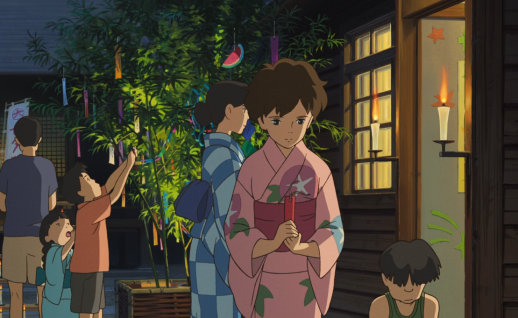 When Marnie was There – Tanabata Scene // © Studio Ghibli

A personal favourite, When Marnie Was There by Studio Ghibli, shows a very rural Tanabata festival. You can see Anna Sasaki in the image above, about to write on a red Tanzaku.

And that’s all I have for you today – if you have any questions or just want to say hi, be sure to leave a comment below.

If you are in Vienna on Sunday, I’ll be hosting a calligraphy workshop at the Tanabata Summer Festival.

For another Japanese festival guide, here is my post on: Onbashira Festival, the Ice Candle Festival and the Seinaiji Fireworks Festival.

Until next time,
send a postcard,
Yona